By Gerard Wynn and Alister Doyle

The United Nations panel, which groups 2,500 scientists from more than 130 nations, predicted more droughts, heatwaves, rains and a slow gain in sea levels that could last for more than 1,000 years.

The scientists said it was "very likely" -- or more than 90 percent probable -- that human activities led by burning fossil fuels explained most of the warming in the past 50 years.

That is a toughening from the Intergovernmental Panel on Climate Change's (IPCC) last report in 2001, which judged a link as "likely," or 66 percent probable.

"February 2, 2007 may be remembered as the day the question mark was removed from whether (people) are to blame for climate change," said Achim Steiner, head of the U.N. Environment Program.

"Faced with this emergency, now is not the time for half measures. It is the time for a revolution, in the true sense of the term," French President Jacques Chirac said. "We are in truth on the historical doorstep of the irreversible."

The Kyoto Protocol is the main plan for capping emissions of greenhouse gases until 2012 but it has been severely weakened since the United States, the top source of greenhouse gases, pulled out in 2001. Emissions by many backers of Kyoto are far over target.

A 21-page summary of IPCC findings for policy makers outlines wrenching change such as a possible melting of Arctic sea ice in summers by 2100 and says it is "more likely than not" that greenhouse gases have made tropical cyclones more intense.

The report predicts a "best estimate" that temperatures would rise by between 1.8 and 4.0 Celsius (3.2 and 7.8 Fahrenheit) in the 21st century, within a likely range from 1.1 to 6.4 Celsius.
Temperatures rose 0.7 degrees in the 20th century and the 10 hottest years since records began in the 1850s have been since 1994. Greenhouse gases are released mainly by burning fossil fuels in power plants, factories and cars.

Many backers of Kyoto, binding 35 industrial nations to cut greenhouse gas emissions to 5 percent below 1990 levels by 2008-12, want outsiders led by the United States and big developing nations such as China and India to get involved.

The head of the U.S. delegation defended Bush's policies that brake the rise of emissions rather than cap them. Democrats who control both houses of Congress want tougher action.

"The President has put in place a comprehensive set of policies to address what he has called the 'serious challenge' of climate change," said Sharon Hays, Associate Director of the White House Office of Science & Technology Policy.

Bush pulled out of Kyoto, saying caps would harm the economy and that Kyoto should include developing nations. He focuses instead on big investments in hydrogen and biofuels.

The President of Kiribati, a group of 33 Pacific coral atolls threatened by rising seas, said time was running out.

"The question is, what can we do now? There's very little we can do about arresting the process," President Anote Tong said.

The report projects a rise in sea levels of between 18 and 59 centimeters (7 and 23 inches) in the 21st century -- and said bigger gains could not be ruled out if ice sheets in Antarctica and Greenland thaw.

Some leading scientists had criticized a draft for cutting the range from a 2001 forecast of a rise between 9 and 88 cm. Rising seas threaten low-lying islands, coasts of countries such as Bangladesh and cities from Shanghai to Buenos Aires. 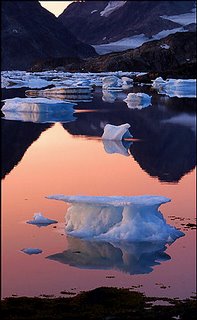 Ice floes dot the bay in Kulusuk,
Greenland, near the Arctic Circle in 2005.
Photo Credit: By John Mcconnico -- Associated Press

*For related UCTP articles on the global climate crisis, see: