A Message from the Transform Columbus Day Alliance*

MLK and TCD: As we remember and honor The Rev. Dr. Martin Luther King, Jr. today, I offer this quote from him for people to keep in mind as Colorado AIM and the Transform Columbus Day Alliance organize to oppose the Columbus Day parade this coming October, and ask allies to join us.

"Our nation was born in genocide when it embraced the doctrine that the original doctrine that the original American, the Indian, was an inferior race. Even before there were large numbers of Negroes on our shores, the scar of racial hatred had already disfigured colonial society. From the sixteenth century forward, blood flowed in battles over racial supremacy. We are perhaps the only nation which tried as a matter of national policy to wipe out its indigenous population. Moreover, we elevated that tragic experience into a noble crusade. Indeed, even today we have not permitted ourselves to reject or to feel remorse for this shameful episode." 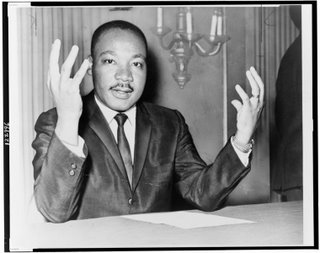