Editorial: Political Intrigue at the OAS

I am writing once again from the Organization of American States (OAS) Headquarters in Washington DC, USA to inform your readers of the behind-the-scenes goings-on at the 9th session of the working group to prepare the draft Declaration on the Rights of Indigenous Peoples. I am a member of the Indigenous Caucus working group.

Once again no CARICOM member state OAS ambassador (or even low level diplomatic representative) was present at the opening ceremony yesterday, in comparison all of the OAS ambassadors from the Latin American member states as well as USA and Canada were present as usual.

For the afternoon session, I was pleased to see a representative of the OAS diplomatic corps from Guyana was in attendance, I can only hope the rest of CARICOM will follow this lead and take an active interest in the proceedings. We could use the staunch and admirable support that Dominica and Haiti have shown at the United Nations Declaration process here at the OAS.

Once again, the representatives of the USA and Canada appear to be using the same semantic arguments and delaying tactics to stymie progress the Indigenous Caucus is attempting to make with the enthusiastic support of Bolivia and Brazil among many others.

The USA and Canada are abusing the 'consensus' system of voting that the OAS employs. From an “outsiders” point of view I personally was shocked to see on dozens of occasions that the Indigenous Caucus would have the support of all present OAS ambassadors but because the USA or Canada did not support an issue it was not passed.

I find it bewildering that the two countries that love to promote 'Democracy' all over the world, literally shoving it down other peoples throats at times, would themselves sabotage the very democratic process at the OAS. I was under the distinct impression that the majority vote ensured success in the democratic system; that being the case it is clear to me that there is no democracy at the OAS. It seems that unless certain countries get their way ad-infinitum, no-one can expect to achieve anything.

It is an awful thing to say about a system that is supposedly concerned with the rights of indigenous peoples but this is a disgustingly corrupt modus-operandi that is in urgent need of redress. 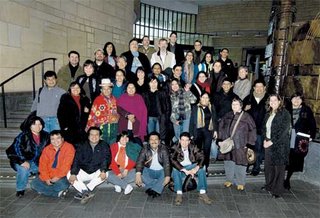 Photo courtesy National Museum of the American Indian/Katherine Fogden -- About 50 delegates of the Indigenous Rights Caucus of the Organization of American States toured the Smithsonian's National Museum of the American Indian on Jan. 21. They were in Washington, D.C., to meet about the Universal Declaration of Indigenous Rights.
Posted by UCTP TAINO NEWS at 10:44 PM