Endangered and Threatened Species of Puerto Rico and the U.S. Virgin Islands (Part I)

"Of the 78 species protected by the Endangered Species Act in Puerto Rico and the US Virgin Islands, 29 are animals and 49 are plants. These species are disappearing and it is the responsibility of everyone to protect them."

Amphibians (3):
a) Golden Coqui – This species is a small frog attaining a maximum size (snout-vent length) of slightly less than 2.54 centimeters, having an indistinct tympanum and lacking prevomerine teeth. The color is olive-gold to yellow-gold without pattern. The Golden Coqui gives birth to it's young, carrying them in skin pouches and can reproduce more than once a year. Juveniles resemble the adults. The golden coqui (Eleutherodactylus jasperi) is found only in Puerto Rico. 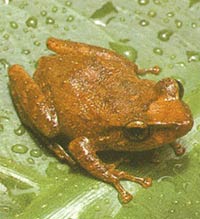 
b) Puerto Rican Crested Toad (Sapo concho) – The Puerto Rican crested toad is a medium-sized toad, 64 to 12O millimeters (2.5 to 4.5 inches) in snout-vent length, yellowish-olive to blackish-brown in color, with prominent supraorbital crests and a distinctive long, upturned snout. Males are considerably smaller than females, and exhibit less prominent crests. No studies have been conducted on the Puerto Rican crested toad's feeding habits, but as a general rule toads are opportunistic feeders that primarily consume insects and other invertebrates. This toad is presently known to exist only on the main island of Puerto Rico. A single large population is known from the southwest coast in the Guanica Commonwealth Forest, and a small population is believed to survive on the north coast. Historically, the Puerto Rican crested toad (Peltophryne lemur) has been collected on the island of Virgin Gorda in the British Virgin Islands. The known historic distribution on Virgin Gorda is very limited and the species has not been observed there for at least 2 decades. It is assumed to have been extirpated from that island. 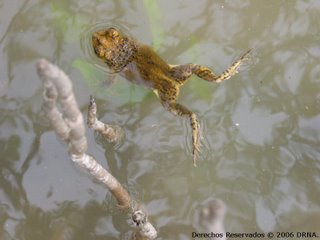 
c) Puerto Rican rock frog (Guajon) - The guajon (Eleutherodactylus cooki) or Coqui Guajon, also known commonly as is a relatively large frog, approximately 8.5 centimeters (3.3 inches) in length. It is solid brown in color, although attending and calling males may have a yellow throat. The guajon may be the only species of Eleutherodactylus in Puerto Rico that exhibits sexual dimorphism in color (Joglar et al. 1996). In both sexes, the frogs have large, white-rimmed eyes, giving the species a specter or phantom-like appearance. The species is characterized by having large truncate discs and by a peculiar, melodious and low voice which is completely different from any other species of Eleutherodactylus in Puerto Rico (Rivero 1978). Rivero (1978) states that its peculiar calling and phantom-like appearance made many local people fearful of the species, believing that the mere sight of an animal would be fatal.