Another Day of Mourning for Native Peoples 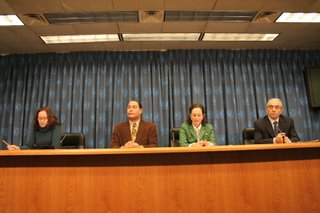 UNITED NATIONS, Dec 12 (IPS) - While hundreds of advocacy groups across the world observed International Human Rights Day last Sunday with joy and solemnity, leaders of the world's 370 million indigenous peoples say they had no reason to be part of any celebrations.

"We are shocked," said Victoria Tauli-Corpuz, head of the U.N. Permanent Forum on Indigenous Issues, adding that native peoples would have happily marked the day if the U.N. had passed a long-awaited resolution calling for international recognition of their fundamental human rights.

Tauli-Corpuz and others said they were "deeply disappointed" at the recent decision of the Third Committee of the General Assembly to defer a resolution approving the Declaration on the Rights of Indigenous Peoples.

On Tuesday, native leaders and human rights activists named and shamed countries that blocked the U.N. move on the proposed declaration and said that the vote in favour of deferment served no human rights purposes.

While it was the African bloc of states that had called for further discussion of the draft, indigenous leaders blamed the United States, Canada, Australia and New Zealand for orchestrating a negative campaign.

"There was a bit of a shock," Roberto Mucaro Borrero of the Indigenous Peoples Caucus told IPS in response to a question about the role of Namibian and other African diplomats in the Third Committee, which deals with social, humanitarian and cultural issues.

Borrero said he and his colleagues were surprised by the African countries' position because until recently they had all supported the declaration as written. "This strategy was supported by the U.S. We also had received reports of pressure on African countries from rich countries," he said.

Just like the U.S. and Canada, the African nations want the wording on "the right to self-determination" to be changed. They argue that use of this phrase could cause political troubles for governments in many countries on the continent.

But indigenous leaders from the Western hemisphere, Australia and New Zealand say they will never compromise on this aspect of the draft because "self-determination" is central to their struggle for recognition of their rights.

"It is a critical matter to indigenous peoples throughout the world," Phil Fontaine, National Chief of the Assembly of First Nations in Canada, told IPS. "This document speaks positively about our rights to self-determination."

Deploring Ottawa's position on the declaration, Fontaine pointed out that Canada is one of the richest countries in the world, yet its indigenous people are condemned to live in extreme poverty.

Other indigenous leaders from Canada seemed equally outraged at Ottawa's collaboration with the U.S., Australia and New Zealand.

"It shows exactly how Canada wants to dictate international standards by its own standards, which have been criticised by U.N. human rights bodies in many concluding observations to Canada's treatment of my people for decades," said Arthur Manuel, chief of the Secwepemc Nation in British Columbia.

The declaration, which has already been approved by the Geneva-based U.N. Human Rights Council, fully recognises indigenous peoples' right to control their traditional lands and resources, a point that the U.S. and its allies are strongly opposed to.

Washington and other opponents of the resolution have repeatedly argued that the declaration is "inconsistent with international law". The U.S. has also repeatedly held that the indigenous land claim ignores current reality "by appearing to require the recognition to lands now lawfully owned by other citizens".

Indigenous peoples describe this argument as "racist" while a U.N. body that investigates discriminatory practices also views this line of reasoning as unacceptable.

The declaration was first put together by the U.N. Permanent Forum last May, following more than 20 years of negotiations involving governments, indigenous leaders and non-governmental organisations.

In addition to recognising the rights of indigenous peoples to their lands, the declaration states that all native peoples must be protected from forced assimilation and the destruction of their cultures and languages.

The declaration, which is not legally binding on governments, has received full support from the European Union and almost all Latin American nations.

Last month, the move to get the declaration passed by the Third Committee of the General Assembly was narrowly defeated by 67 votes in favour, 82 in opposition and 25 abstentions.

Urging support for the declaration, Tauli-Corpuz said it is the responsibility of all U.N. member states to address the "past and continuing injustice, racism and discrimination against indigenous peoples".

"International Human Rights Day will be more significant for indigenous peoples once the U.N. adopts the declaration and continues building genuine partnerships and solidarity with them," she said. (END/2006)
Posted by UCTP TAINO NEWS at 3:41 PM