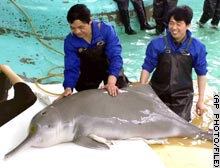 BEIJING, China (AP) -- An expedition searching for a rare Yangtze River dolphin ended Wednesday without a single sighting and with the team's leader saying one of the world's oldest species was effectively extinct.

The white dolphin known as baiji, shy and nearly blind, dates back some 20 million years. Its disappearance is believed to be the first time in a half-century, since hunting killed off the Caribbean monk seal, that a large aquatic mammal has been driven to extinction.
Posted by UCTP TAINO NEWS at 9:31 AM