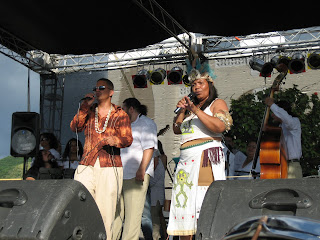 Yauco, Puerto Rico (UCTP Taino News) – In recognition of cultural arts from throughout the world, the municipality of Yauco celebrated its first annual International Arts Festival at the town’s central plaza December 8-9. The festival also highlighted Taino culture with its presentation of prominent Boriken Taino artisans as well as several Taino cultural performers.

The towns of Yauco and nearby Guayanilla are historically documented as part of the ancestral territory of Agueibana, Boriken’s most well-known Taino Kasike. In the 16th century Agueibana entered into the first recorded “guaitiao” or treaty with Juan Ponce de Leon.

Understanding this region’s history, local residents are proud of their ancestral heritage and they celebrated this pride with a diverse array of artworks, handicrafts, song and dance.