Floyd Red Crow Westerman Crosses Over Into the Spirit World 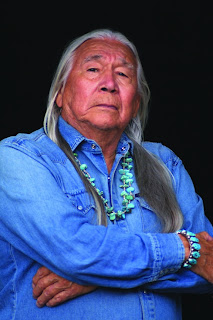 The UCTP pauses to offer condolences to the family of Floyd Red Crow Westerman (Dakota) who crossed over into the spirit world this morning in Los Angeles, California. A renowned American Indian activist-singer-songwriter, Westerman made his big screen debut in the movie Renegades (1989) and is best remembered for his role as elder/leader Ten Bear in Dances with Wolves (1990). His songs like "Custer Died For Your Sins" and "BIA Blues" have helped spread the American Indian Movement's message throughout the world. Floyd performed with countless musicians including Willie Nelson, Bonnie Raitt, Don Henley in large benefit concerts for Indian self-determination, human rights and environmental protection. He toured the world with Sting to publicize the plight of the Rainforest People who are dying along with the Rainforests and, as caretakers, must be protected if the rain forests are to go on providing for all life on Earth. Red Crow has been an ambassador of good will representing the International Indian Treaty Council from the time of its founding. Services are pending.
Posted by UCTP TAINO NEWS at 5:30 PM