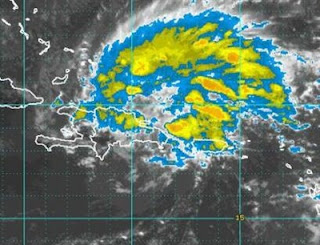 By Manuel Jimenez
SANTO DOMINGO, Dominican Republic (Reuters) - Flash flooding from Tropical Storm Olga's torrential rains killed at least eight people in the Dominican Republic and forced tens of thousands out of their homes, government officials said on Wednesday.
The storm weakened on Wednesday to a tropical depression after it exited Hispaniola, the island shared by Haiti and the Dominican Republic. But flooding remained a deadly threat as the remnants of Olga moved west across the Caribbean, forecasters at the U.S. National Hurricane Center in Miami said.

By late afternoon, Olga was just a broad mass of thunderstorms centered 65 miles north of Kingston, Jamaica. It was moving rapidly west on a course that would keep the center south of Cuba and take it over Mexico's Yucatan Peninsula by Saturday.
Olga's top sustained winds dropped to 35 mph (55 kph), below the threshold to be called a tropical storm, and forecasters expected it to dissipate further on Thursday.
See full story at: http://news.yahoo.com/s/nm/20071212/wl_nm/storm_olga_dc
Photo: Subtropical storm Olga is seen in the Caribbean in a satellite image taken December 11, 2007. (NOAA/Handout/Reuters)