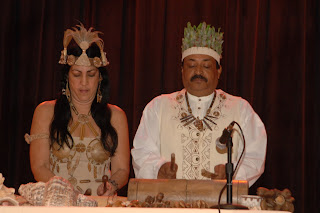 UCTP Taino News – In recognition of Native American and Puerto Rican Heritage month, the Taino People and culture are featured in Scholastic’s online news magazine. Scholastic is the world's largest publisher and distributor of children's books and a leader in educational technology.

Announcements focusing on the article, entitled “Taino Sounds,” were also featured in the company’s print versions of Scholastic News for Kids.

The highlight on the Taino has the potential to reach millions of students and teachers around the world via the internet and the print sources. The article focuses on particular aspects of Taino world view, including relationships to the natural world and the music of famed Puerto Rican Taino cultural icon, Paseo Taino: Travesia Taina. Under the direction of Elba Anaca Lugo, Paseo Taino is one of the oldest continuing Taino presentation troupes on the island.

“The music, performing, and presentation style of Paseo Taino: Travesia Taina has influenced and given birth many if not all contemporary Taino cultural groups on and off the island whether they are aware of it or not” stated Roberto Mukaro Borrero a representative of the United Confederation of Taino People.

Speaking on Scholastic’s Taino focus, he continued noting “What is important about this focus is that it presents our people in a contemporary light and not as extinct, relics of the past.”

“Scholastic’s ‘Taino Sounds’ article is a positive example of a partnership that was based on consultation and mutual respect” Borrero also stated “As an indigenous community that extends throughout the Caribbean, these are the types of relationships that we are striving to cultivate and promote.”