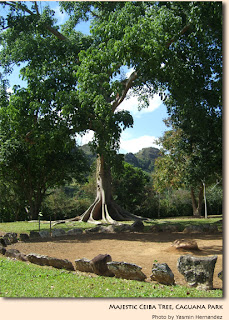 Sitting in the lush central mountain range of Puerto Rico (Borike), the ancestral home of the Boriken Taíno people, Caguana is the largest and most complex ceremonial site in the West Indies. Caguana Ceremonial Center consists of a large central plaza, a ceremonial dance area, ten rectangular earth-and-stone– lined ball courts and plazas and one circular plaza, as well as the remains of an oval-shaped structure and a sacred cemi mound. Ethno-historical accounts of early "explorers" noted that ceremonial sites like Caguana were places where highly important ceremonial ball games were held. Today, one can still see stone collars, elbow stones, and petroglyphs carved on perimeter stones. Caguana is today one of many sacred sites for the Taíno people.

Because of its rich archaeological significance, Caguana became a National Historic Landmark in 1993. However, this designation has not prevented vandalism and tourist devastation to the ceremonial center. Now, the Taíno are calling upon the Puerto Rico government and the U.S. National Park Service to "ensure that any governmental projects promoting tourism go hand in hand with protecting and safeguarding the integrity of local Taíno culture, sacred sites and the environment. "