New York, NY (UCTP News) - As delicate ecosystems supporting millions of lives hang in the balance, indigenous representatives from around the globe began a two-week session of discussions on Monday, May 14 with top United Nations officials, Government representatives and members of civil society to highlight the struggle to defend their rights to access and use the land and natural resources in their territories.

The sixth session was opened with an invocation from Tracy L. Shenandoah, Chief of the Onondaga Nation, Eel Clan. Acknowledging “red willow” as the leader of medicines, Shenadoah said the “ the Creator had planted medicines, including berries, for people to use." He also gave thanks to the birds, especially the eagle, and to the “three sisters of all foods: corn, beans and squash.” Shenandoah also gave thanks to the waters for their help in creating peace. His statement was followed by a performance by the Laihui cultural group from Manipur, India.

Victoria Tauli-Corpuz, Chairperson of the Permanent Forum on Indigenous Issues, addressed those gathered by stating “without access to and respect for the rights over their lands, territories and natural resources, indigenous peoples’ distinct cultures -- and the possibility of determining their on development -- become eroded.”

Highlighting new developments, Tauli-Corpuz stated that one of the major thrusts for 2007 would be to press for the General Assembly’s adoption of the United Nations Declaration on the Rights of Indigenous Peoples, approved by the Human Rights Council last year. Indigenous peoples worldwide had been “deeply disappointed” by the Assembly’s decision to defer action on the Declaration last year. Noting that amendments had been made to the text in the meantime, she said that every effort should be made to ensure that what was put before the Assembly was the Council-approved version, not one “which mangled the Declaration beyond recognition.” “The fate of this Declaration is in your hands and the Governments who are here today,” she said.

Among the many expert presentations and reports by representatives on United Nations agencies and Funds, Erica-Irene A. Daes, of Greece, an elected member of the Working Group on Indigenous Populations and Special Rapporteur on Indigenous People’s Land Rights, said one of the most acute and complex situations facing the world’s indigenous peoples was the refusal by certain Governments to promote and protect their rights to land and natural resources. To understand the profound relationship of indigenous peoples to their lands and natural resources, cultural differences between indigenous and non-indigenous peoples should be recognized.

Among the participants attending the meeting, Chief Reginaldo Fredericks of the Joboshirima Lokono Arawak Community of Venezuela noted the importance of meeting stating “it is critical for us as Indigenous Peoples to follow-up on the recommendations made and report on these activities to our peoples.”

Chief Fredericks is a member of the Indigenous Peoples Caucus of the Greater Caribbean, which forms annually at the UN meeting to lobby Caribbean indigenous issues.

Caribbean indigenous delegates also participated along with indigenous representatives of other regions at a rally in support of the Declaration on the Rights of Indigenous Peoples. Speaking on behalf of indigenous leaders from Puerto Rico, Dominican Republic, Dominica, Trinidad, Guyana, Venezuela, and Barbados, UCTP President and Chairman Roberto Mucaro Borrero reaffirmed their support of the Declaration as adopted by the Human Rights Council in June 2006.

Also in attendance at the session, Taino artists John Marrero and Reina Miranda joined UCTP delegates Mildred Gandia and Borrero at the opening of the special art exhibition, which would run through the Forum. Selected works of Marrero and Miranda were on display along with various works of Lokono and Taino artists: George Simon, Mildred Torres-Speeg and Naniki Reyes Ocasio.

The Forum’s sixth session will run through 25 May and will consider solutions to end the senseless exploitation of traditional lands and natural resources, a key issue at the heart of indigenous people’s efforts to gain recognition of their rights. 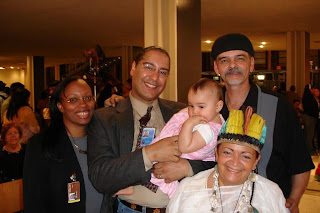