Barama forced to pull out of Akawini: Villagers demand compensation, or will take legal action 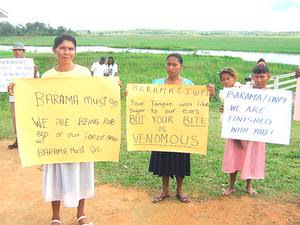 Guyana, South America -Barama Company Limited yesterday announced that it would begin to demobilise its equipment and close its St Monica/Akawini operation following a decision by the Akawini Village Council that the company and its sub-contractor must go.

The Village Council has, for the past several weeks, appealed for help saying that it was being taken advantage of and treated unfairly. The Amerindian Peoples' Association (APA) and the Guyanese Organisation of Indigenous Peoples (GOIP) had, on behalf of the people of Akawini, called on Barama and its sub-contractor Interior Woods Products Inc (IWPI) to cease all logging operations in the titled lands.

The council holds the view that Barama, which has a sub-contract to harvest on behalf of IWPI, is also complicit in the bad arrangement. Officials of the Guyana Forestry Commission (GFC) and IWPI were noticeably absent from the meeting, held at the Akawini Primary School yesterday.

Several persons holding placards met the Barama team at Akawini protesting the contractual arrangement and calling for Barama and IWPI to go.

General Manager of Barama Girwar Lalaram said at a meeting at Akawini yesterday that since the Akawini Village Council was holding fast to its position without giving a hearing to the company, he was left with no choice but to bring all operations to a close.

The village also accused Barama and IWPI of logging hardwoods in addition to the peeler logs used to make plywood. But an official from the company said that it logged "mostly" peeler logs, acknowledging that some hardwoods were cut, but to a lesser degree.

Further, the Village Council read out a list of demands to Barama. These included compensation for every log taken and for monies owed to workers. Compensation for degradation to ecosystems supporting wildlife and for loss of traditional way of life was also requested.

The Village Council said that if these demands were not met then legal action would follow.
Before he announced the end of operations, Lalaram had said that Barama would never attempt to cheat residents or deny them what is supposed to be delivered to them. He said if the residents wished, Barama would deliver on the promises made by the IWPI. According to Lalaram, IWPI was supposed to complete some social activities in the areas of health, education and recreation. "What IWPI has failed to do, Barama commits itself to delivering," Lalaram said to the villagers. "If the captain tells me what was promised, I will deliver them within a short time," he added.

According to Lalaram, at a Village Council meeting last Friday, the villagers had decided that they wanted to work out an arrangement with Barama, leaving IWPI out of the deal.

Lalaram said he was told that 54 people from the village and surrounding areas were employed by Barama and he insisted that people work in camps other then the one in St Monica, near Akawini. "I am also willing to make the investment in those people in the two villages to train them to work for Barama," Lalaram said.

The APA and GOIP said in their joint release some days ago that workers were very poorly paid, some earning as little as $17,000 per month. [Guyana dollars]

In response, Lalaram said: "On wages and salaries, I expect that Barama will not pay any person below the national minimum wage." He said too that overtime would be given to anyone who worked outside regular hours, as well as lunch allowances. He said the company would comply with all labour regulations.

"I stand firm, we will have nothing to do with IWPI. If the people decide that they don't want IWPI, then IWPI is out. I am willing to remodel the agreement between the community and Barama to reflect certain social commitments. I will provide to the children of Akawini and St Monica two computers, whether Barama continues to operate or not."

Toshao of Akawini, David Wilson asked Lalaram how long he knew of the company IWPI. Lalaram responded that he was not involved in the initial arrangement with IWPI and the Akawini Village Council. But he said he had checked at the Deeds Registry and found that the company was registered with two named directors.

Wilson said the Akawini Village Council had never seen the subcontract "and we were never consulted before IWPI entered into this subcontract with Barama."

Akawini has a timber harvesting and sales agreement with IWPI, which expressly states that IWPI could only engage the services of a sub contractor after consulting the holder, namely the Akawini Village Council.

The Village General Meeting of Akawini took a decision on February 28, 2007 to terminate the IWPI agreement because of alleged breaches.

The council said it wrote to the IWPI in March informing the company of the decision to end the agreement; no response was received.

Lalaram said the door was still open for negotiations on possible arrangements, but he decried the confrontational stance by the Akawini Village Council. He said Barama would issue a full press statement on the Akawini issue.