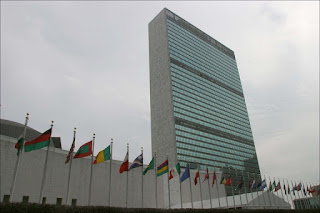 New York, NY (UCTP News) - Over 2000 Indigenous Peoples' representatives from all regions of the world will converge on the United Nations this week to engage senior government officials, UN agency representatives, civil society, and academia at the 6th Session of the UN Permanent Forum on Indigenous Issues from 14-25 May, 2006. The theme of the session is land, territories, and natural resources. Approximately 60 special events are also scheduled.
This year's theme goes right to the heart of indigenous peoples' efforts to gain recognition for their rights.
"With the increasing desire of states for more economic growth, senseless exploitation of indigenous peoples' territories and resources continues unabated," said Victoria Tauli-Corpuz, Chairperson of the UN Permanent Forum on Indigenous Issues.

She further stated that the majority of the world's remaining natural resources “minerals, freshwater, potential energy sources and more - are found within indigenous peoples' territories. Access to and ownership and development of these resources remains a contentious issue."

Although in recent decades some progress has been made in the area of legal recognition of indigenous peoples' rights to the protection and control of their lands, territories and natural resources, in practical terms this recognition has not always translated into reality. Threats to indigenous peoples' lands and territories include such things as mineral extraction, logging, environmental contamination, privatization and development projects, the classification of lands as protected areas or game reserves, the use of genetically modified seeds and technology and monoculture cash crop production.

Among the hundreds of indigenous representatives attending the session, a delegation of Indigenous Peoples from the Greater Caribbean will attend the session and include representatives of the United Confederation of Taíno People (UCTP), Caney Quinto Mundo, Joboshirima Lokono Arawak Community, Presencia Taína, and KuKarey Taino Spiritual Circle among others.

UCTP President and Chairperson of the NGO Committee on the UN International Decade of the World's Indigenous Peoples, Roberto Múcaro Borrero will have the honor to serve as Master of Ceremonies for the Forum’s opening Cultural Event and Art Exhibition inauguration on Tuesday 16 May, 2006. This special event will also feature a special performance by celebrated Grammy Award-winning Native American singer/songwriter Joanne Shenandoah.

The art exhibition will feature an incredible array of indigenous art works and photography from around the world including celebrated artists from the Taíno and Lokono Arawak communities such as George Simon (Lokono), Mildred Torres-Speeg (Taíno), Naniki Reyes Ocasio (Taíno), John "Aguilar" Marrero (Taíno), and Reina Miranda (Taíno).

A side event focusing on the Caribbean Indigenous Peoples is also scheduled during the second week of the session as well as a follow-up to the World Summit on the Information Society (WSIS). The WSIS follow-up event is hosted by the International Indigenous ICT Task Force and will highlight the launch of a new international indigenous portal, which will serve to educate the public about indigenous peoples from around the world including the Caribbean.

"The UN Permanent Forum is a unique venue where indigenous peoples’ concerns can be heard and discussed with governments, the UN and civil society," said Elissavet Stamatopoulou, Chief of the Secretariat of the Permanent Forum on Indigenous Issues, UN Department of Economic and Social Affairs.

Estimates point to more than 370 million indigenous peoples in some 70 countries worldwide. While they are from diverse geographical and cultural backgrounds, they share commonalities such as: lack of basic healthcare; limited access to education; loss of control over land; abject poverty; displacement; human rights violations; and economic and social marginalization.

The Permanent Forum on Indigenous Issues was established by the United Nations Economic and Social Council (ECOSOC) in July 2000. The Forum was called upon to provide expert advice and recommendations on indigenous issues to the UN system through the Council; raise awareness and promote the integration and coordination of relevant activities within the UN system; and disseminate information on indigenous issues.
----------
See also:
http://www.un.org/esa/socdev/unpfii/documents/6_session_culturalevent_en.doc
Posted by UCTP TAINO NEWS at 10:58 PM