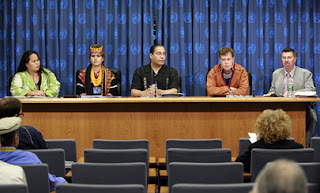 Press Conference by Representatives of Indigenous Peoples: John Scott (right) from the Secretariat of the Convention of Biodiversity, addresses a press conference to brief correspondents on the indigenous peoples' vulnerability to climate change, at UN Headquarters in New York. With him are (left to right) Malia Nobrega from Hawai, Lakhan Bibi from Hindu Kush, Roberto Borrero, Taino from Puerto Rico, and Mattias Ahren, a Saami from Norway. Location: United Nations, New York. Date: 22 May 2007

Indigenous and tribal peoples -- especially those living on slowly sinking small islands and in increasingly polluted mountain ranges -- were now the “human face” of the devastating effects of global warming, and the traditional knowledge that their communities possessed should be tapped in the search for answers on how to craft an international response to climate change, an official from the Secretariat of the Convention on Biological Diversity told reporters…
See the full story at:
www.un.org/News/briefings/docs/2007/070522_Indigenous.doc.htm