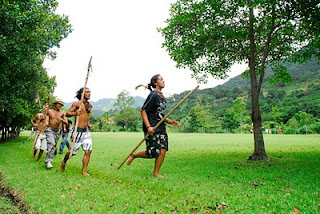 Indigenous Taino run for Peace and Dignity in Boriken last year.
(Photo: Amy Ponce)
Kiskeia (UCTP Taino News) - After a successful two-week ceremonial run last summer in Borikén, organizers are hoping the momentum will continue in Kiskeia ( Dominican Republic ) later this year. The run in Borikén was organized, in part, to raise awareness about sacred sites and indigenous Taino culture. A similar focus would be the basis of the proposed spiritual run on the neighboring island.
“The Borikén 2010 run was connected to the Peace and Dignity Journeys. These are continental runs organized in response to an ancient prophecy that calls for the relationships of Indigenous Peoples of the Americas to be strengthened for the sake of our future generations.” said Vanessa Inarunikia Pastrana.

Pastrana was a visionary behind the Caribbean run. During these runs, sacred staffs representing Indigenous Peoples and their prayers from throughout the Americas are carried ceremoniously by the participating runners.

“These runs are fulfilling the prophecy of the eagle and the condor – the coming together of our Peoples” she continued. “Now the guaraguao, the Caribbean hawk is a part of this sacred circle.”

The Borikén 2010 Run marked the first time the sacred ceremonial staffs carried during the continental runs were presented in the Caribbean.

Pastrana has already met with several Kiskeia Taino community members in the United States such as Roman Guaraguarix Perez to provide some orientation on the process. She shared logistical information as well as stressed the spiritual nature of the run. Perez has agreed to lead the effort for the Kiskeia run and is now in contact with potential local organizers.

“As Borikua Taino we are here to support our guaitiao (relatives) from Kiskeia.” said Pastrana. “The organization of this ceremonial run however should be led by the local community.”
UCTPTN 01.17.2011
Posted by UCTP TAINO NEWS at 8:15 PM