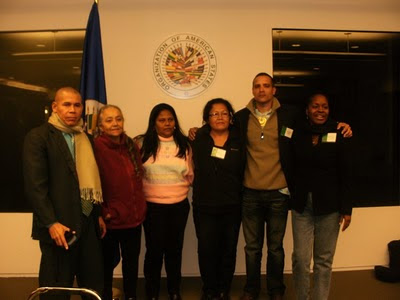 Some of the Caribbean Indigenous delegation meeting at the Organization of American States in Washington, DC. From left to right - Dr. George Norton, Liselote Naniki Reyes Ocasio, Cleis Tavarez Maria, Eveline Moesijem Monstanto, Damon Corrie, and Zoila Maria Ellis.
Washington, DC (UCTP Taino News) – The 13th Meeting of Negotiations in the Quest for Points of Consensus on the OAS draft American Declaration on the Rights of Indigenous Peoples began today in Washington, DC. The Meeting of Negotiations will take place at the headquarters of the Organization of American States (OAS) from January 18 to 20, 2011.

Some points of discussion expected to be covered at this session include: Rights of association and assembly, Indigenous law and jurisdiction, contributions of the indigenous legal and organizational systems, treaties, and Indigenous spirituality.