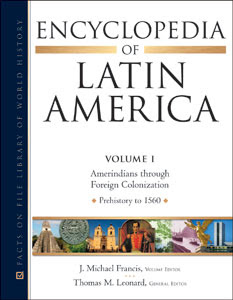 UCTP Taino News – Facts On File/Infobase Publishing has released a new four-volume Encyclopedia of Latin America, which covers the history and culture of Central America, South America, and the Caribbean from early settlements to the present day. Each volume focuses on a specific time period in the region’s development.
The first volume entitled “Amerindians through Foreign Colonization” explores pre-colonial history through the achievements of the Incas in the 16th century. Enthusiasts of Caribbean history in particular should find the entries “The Caribbean before 1492” and “Puerto Rico to 1560” by Roberto Borrero authoritative, yet accessible.

Other volumes explore themes of colonization and independence movements until the 1820s, Latin America’s ‘search for its own identity’ from the middle of the 19th century to the start of the 20th, and Latin America from the 20th century through the present day. A collection of primary source documents at the end of each volume gives a firsthand account of the major developments of the era. A glossary, bibliography, and index in each volume, a cumulative index in Volume IV, and 250 black-and-white images and maps round out this very attractive and reliable resource on Latin America.

Available on Amazon.com and other sources, the general editor of the Encyclopedia of Latin America is Thomas M. Leonard, Ph.D, and volume editors include J. Michael Francis, Ph.D., Mark A. Burkholder, Ph.D., and Monica A. Rankin, Ph.D.