15% of Dominicans have Taíno DNA 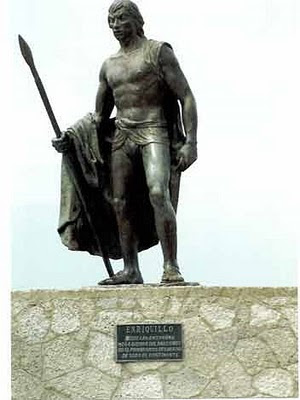 A monument to the Taino Kasike (Chieftain) Guarokuia or Enriquillo in the Dominican Republic. Guarokuia led a successful rebellion against the Spanish forces resulting in the first treaty between Indigenous Peoples and colonizers in the western hemisphere.
Santo Domingo (UCTP Taíno News) – A recently concluded DNA study indicates that 15% of Dominicans have indigenous Taíno genes not found anywhere else. The research which began in 2006 also determined that another 15% conserve Euro-Asian genetic characteristics, whereas 70% of the population of the Dominican Republic has mitochondrial DNA of African origin.

The research team leader Dr. Juan Carlos Martinez-Cruzado noted that “The study demonstrates that indigenous mitochondrial DNA exists in Dominican society today, that DNA is unique.” Martinez-Cruzado is the head of the Biology Department of Puerto Rico University in Mayaguez and he is well-known for conducting similar studies in Borikén (Puerto Rico).

Puerto Ricans show an approximate 61% contribution of Taíno mitochondrial DNA. Comparisons between the two countries however must take into consideration the difference in population sizes.

Jorge Estevez, a Taíno from Kiskeia (Dominican Republic) considers the study impressive considering that “we are not supposed to have any Native descent.” Estevez is on staff at the National Museum of the American Indian in New York.

The study is entitled “Continental origins of the first populations of the Caribbean islands and the migratory movements which formed them. DNA in Dominican Republic.”