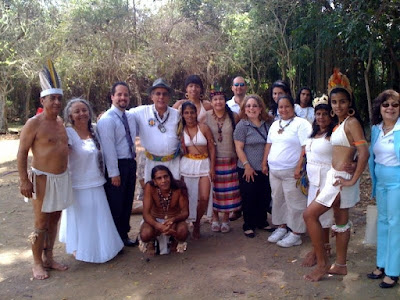 UCTP Photo: Some of the participants of the 2010 Census Taino heritage celebration at the Tibes Ceremonial Center in Ponce, Puerto Rico.
Ponce, Boriken (UCTP Taino News) – The 2010 Census Road Tour celebrated Taino heritage at the Tibes Ceremonial Center in Ponce, Boriken (Puerto Rico) on March 4, 2010. The event included participation from local elected officials, Census Bureau representatives, Taino community members, and the general public. The program was an official collaboration between the U.S. Census Bureau, the honorable Dr. María Meléndez Altieri, Mayor of Ponce, and the Boriken Liaison Office of the United Confederation of Taino People.

The event opened with a prayer in the Taino language presented by Lizzy Sarobey, Director of the cultural group Wakia Arawaka Taina. Opening remarks were presented by representatives of the Mayor’s Office, the Census Bureau, and UCTP representative Roger Guayacan Hernandez.

“The indigenous category was taken off the census in Boriken (Puerto Rico) in the year 1800” stated Roger Guayacan. “We now have the opportunity to write ourselves back into history.”

The UCTP Liaison Office also distributed specific information on how local Taino community members could identify themselves in the census questionnaire. The Confederation is urging local Taino to fill out the census questionnaire by choosing American Indian for Race at question 9 and writing in Taino as ‘principle tribe’. Individuals can also choose ‘Puerto Rican’ as Ethnicity at question 8.

“Some people have been confused by the questionnaire” said Roger Guayacan. “They think that the American Indian identification only applies to U.S. mainland tribes but that is not the case.” He continued stating “The Census Bureau defines American Indian as individuals of indigenous origin from throughout the Americas.”

2010 Census Questionnaires are expected arrive to households in Puerto Rico and the U.S. around mid-March.