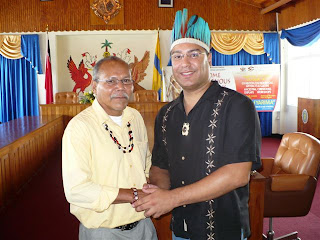 Kallinago Chief Charles Williams and Roberto Mucaro Borrero, the President and Chairman of the UCTP’s Office of International Relations and Regional Coordination signed the declaration on behalf of their respective communities during the celebration of Amerindian Heritage Week in Arima, Trinidad.

“Indigenous Peoples need to support each other as there is strength in unity” declared Chief Williams.

The declaration promotes solidarity between the Kallinago and the Taino at the local, national, and international levels.

“Treaties between Indigenous Nations are tangible demonstrations of our sovereignty and our internationally recognized right to self-determination” noted President Borrero. “This declaration makes it clear to all that the Kallinago and the Taino recognize each other as Indigenous Peoples of the region”.

The Kallinago Carib Nation is the only indigenous community in the Caribbean islands who maintain an officially recognized territory via a treaty with the government of Dominica. The UCTP represents Taino People throughout the region and the Diaspora.

The “Declaration of Unity” with the Kallinago Nation follows a series of similarly historic treaty ratifications by the United Confederation of Taino People. Currently, the UCTP maintains treaty relationships with the Santa Rosa Carib Community of Trinidad, the Joboshirima Arawak Community of Venezuela, the Guyanese Organization of Indigenous Peoples (GOIP), and the Eagle Clan Arawaks of Barbados and Guyana.
Posted by UCTP TAINO NEWS at 12:57 AM