Access, Benefit Sharing, and the Convention on Biological Diversity 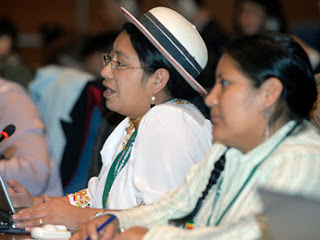 Montreal, Canada (UCTP Taino News) – Delegates from around the world are attending the fifth meeting of the Ad Hoc Open-ended working group on Access and Benefit Sharing of the Convention on Biological Diversity (CBD) in Montréal, Canada. In relation to the CBD, the Working Group - convening from 8 – 12 October 2007 - is negotiating elements of an international regime on access and benefit-sharing. The items being discussed include access to genetic resources; fair and equitable sharing of benefits arising out of their use; measures to support compliance with prior informed consent (PIC) and mutually agreed terms (MAT); an internationally recognized certificate of origin/source/legal provenance of genetic resources; capacity building; and indicators for ABS.
Among the participants to this important session are representatives of Indigenous Peoples who are collectively represented by the International Indigenous Forum on Biodiversity (IIFB) and the Indigenous Women’s Biodiversity Network (IWBN). The effectiveness of indigenous participants is further increased as IIFB and IWBN proposals are backed by statements from indigenous regional caucuses that reflect the diversity of issues.
On the opening day of the session, both the IIFB and IWBN welcomed the recent adoption of the UN Declaration on the Rights of Indigenous Peoples (UNDRIP). The IIFB recalled that the Declaration’s Article 18, which affirms Indigenous Peoples’ right to participate in decision making in matters that affect them and, along with IWBN, stressed that “without recognition of indigenous rights, especially “free prior and informed consent (PIC), there can be no access.”

In an interview with local media, Roberto Mukaro Borrero (Taino), a Caribbean indigenous representative attending the session stressed the importance of the meeting stating “Indigenous Peoples need to be aware of and continue to engage this process as states are attempting to codify ‘sovereign rights’ over genetic resources and derivatives.”

Borreo continued noting that “Indigenous Peoples who have been following this process since its inception remain very concerned that states are misinterpreting their rights over natural resources as state sovereignty does not amount to absolute political or legal freedom. The sovereignty of states is limited by the UN Charter and by international human rights law.”

While some states parties spoke out strongly with regard to the rights of Indigenous Peoples, not all state delegations were as supportive. Canada for example objected to citing the UNDRIP, pointing out that the declaration is not legally binding.

The Working Group continues its negotiations on ABS until Friday, 12 October. This meeting will tie into the session being held next week on the CBD’s Article 8j. This article which focuses on "Traditional Knowledge" specifically mentions Indigenous Peoples and the need for states to respect, preserve, and maintain indigenous knowledge, innovations, and practices.
Negotiations on the international ABS regime will continue at the Working Group’s sixth session to be held from 21-25 January 2008, in Geneva, Switzerland.
Posted by UCTP TAINO NEWS at 6:14 PM