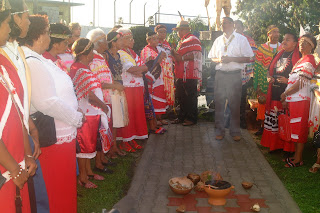 Ameridian Heritage Week Ceremony, Arima, Trinidad
Trinidad and Tobago (UCTP Taino News) – October 14 thru 19 2007 is designated Amerindian Heritage Week in the “Twin Republic” of Trinidad and Tobago. Celebrations, ceremonies, and educational activities are being led and organized by the Santa Rosa Karina (Carib) Community with the support of the government of Trinidad.

Some highlights of the week long celebration include ceremonial processions, ceremonies, crafts exhibitions, visits to sacred and historic sites, meetings with high-level government officials, and a meeting of the Caribbean Organization of Indigenous Peoples (C.O.I.P.).

In solidarity with the Santa Rosa Carib Community, indigenous delegations representing Guyana, Surinam, Belize, Venezuela, Dominica, Puerto Rico and from as far as Canada are participating in the celebration.

Under the leadership of Chief Ricardo Bharath-Hernandez, the Santa Rosa Community continues to raise the prominence of Trinidad’s indigenous descendants. At last year’s celebration the government announced the formation of a cabinet committee to review and issue recommendations regarding the island’s Indigenous Peoples. The committee, which includes government and Santa Rosa Community representatives has recently submitted its first report.

During a speech given in Arima this week, Chief Bharath-Hernandez stated that while the community appreciates the government’s support “much more needs to be done”. The Chief then referred to their Community’s outstanding land-base issue and their desire for an official holiday to recognize the contribution of the Twin-Island Republic’s Indigenous Peoples.
Posted by UCTP TAINO NEWS at 12:35 PM