Based on a True Story, Taino Novel Republished 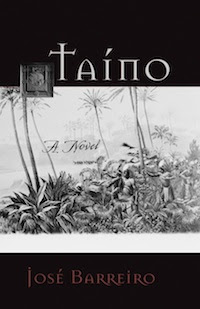 New York (UCTP Taino News) – Dr. Jose Barreiro's masterfully written historical novel chronicling the first encounters between Indigenous Peoples and Europeans beginning with Columbus has been re-released by Fulcrum Press under the title “Taino: A Novel.” The story is told from the point of view of Guaikan/Diego, Christopher Columbus' young adopted Taino Indian son and interpreter. The book vividly recreates the often violent clashes of cultures in the Caribbean during the late 15th and early 16th centuries.

Author Jose Barreiro notes “My first publisher opted for a more generic title, and thus ‘The Indian Chronicles.’” He continued stating ““I always thought the book was best titled ‘Taino,’ as it tells the story of a Taino memory.”

Indeed, the engaging and at times heartbreaking story is told four decades after the arrival of Columbus, when Guaikan is an elderly man. While the story is historical fiction, it is based on true historical events and figures.

Presently a senior fellow at the Smithsonian National Museum of the American Indian, Jose Barreiro is a novelist, essayist, and an activist of nearly four decades on American indigenous hemispheric themes. “Taino: A Novel” is currently available at Amazon.com.