Taino Peoples Continue to Unify in the Caribbean 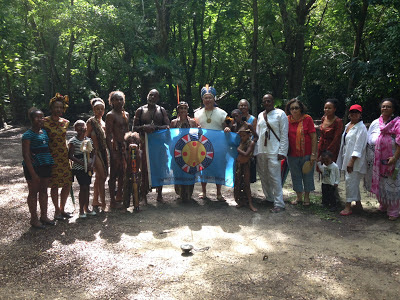 St. Thomas, USVI (UCTP Taino News)  - Opia Taino of St. Thomas and the United Confederation of Taino People adopted a Declaration of Unity on Sunday, December 2nd at Magens Bay, St. Thomas in the U.S. Virgin Islands.  The historic treaty was ratified in a special ceremony by Maekiaphan and Tesroy Phillips and other members of the local Taino and Carib community represented by Opia Taino and Roberto Mukaro Borrero, representing the United Confederation of Taino People (UCTP). 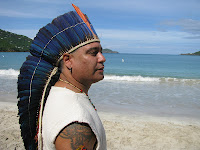 “This is a significant moment in our collective history” stated Borrero. “We are affirming and honoring our ancestral connections across the region in an effort to promote our ancient Indigenous heritage to our present and future generations.”

Maekiaphan Phillips  agreed stating, “I personally feel that the signing of this treaty was extremely important and significant, not only by words but by documentation so that we secure not only our past, but protect our future generations, and dismiss the myth that Taino People are extinct.“


She continued, noting that “The signing of the Treaty out at Magens Bay, an actual ancient Amerindian site here in the Virgin Islands, displayed the utmost respect for our ancestors”

Also in attendance were Senator-elect, the honorable Myron Jackson, Ayesha Morris of the Virgin Islands Humanities Council, and other prominent members of the local community. The ceremony included a procession around the Magens Bay Arboretum, a conservancy of nearly three quarter of a mile featuring indigenous and exotic plant and tree species. The Arboretum is the site of an ancient indigenous settlement, as well as a colonial-era plantation.  Located on the North (Atlantic) side of the island, Magens Bay features a well-protected, world renowned white sand beach.

“If we do not display unity, the myth of us being savage will then prove to be true” states Phillips. “I feel it is important for all Taíno People to embrace each other so that our future generations will be honored to not only say we are the descendants of the Taíno, but we are Taíno.”