"WE NEED TO CONTINUE TO WORK TOGETHER"

"WE NEED TO CONTINUE TO WORK TOGETHER".
A SYNOPSIS OF THE FOLLOW-UP MEETING OF THE 3rd INDIGENOUS LEADERS SUMMIT OF THE AMERICAS 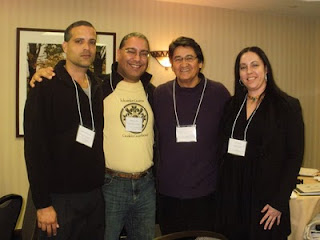 From left to right - Damon Corrie, Roberto Borrero, Ovide Mercredi, and Leilani Stewart meet in Ottawa, Canada to follow-up on the OAS Summit of the Americas process.
Interested readers may follow the developments of the 3rd ILSA at the OAS run website www.summit-americas.org as well as its FaceBook site.

"We need to continue to work together" stated Andrea Montilla of the OAS as she explained the on-going process in the Draft American Declaration on the Rights of Indigenous Peoples. Some advocated believe the proposed OAS Draft Declaration could be stronger than the UN Declaration - if the USA joins the rest of the 34 member OAS community and supports the Declaration instead of obstructing it.

Montilla also noted the importance of the OAS as well as its genuine desire to work with Indigenous Peoples throughout the Americas. The audience concurred, for all have taken note that the Organization of American States HAS indeed prosecuted MORE cases in favor of Indigenous Peoples of the Western Hemisphere than even the United Nations!

Grand Chief Ed John of the Assembly of First Nations of Canada and Celeste McKay of the Native Womens Association of Canada both gave informative opening addresses and likewise both re-affirmed the positives of collaboration with the OAS in a spirit of equity, and made excellent suggestions as to formats the OAS could consider adopting - which would enhance this special relationship between Indigenous Peoples of the Americas and the Organization of American States.

The floor was then opened for audience feedback/questions/comments.

Former Grand Chief of the Assembly of First Nations Ovide Mercredi – who presided at arguably the most tension-filled time in recent memory of relations between Native Nations and the Neo-Colonial Government of Canada in the 1990's (Oka Crisis) - addressed the gathering.

Ovide, still no stranger to controversy and an inspiration to a generation of anti-assimilationist native leaders, eloquently explained the difference between Indigenous Leaders and Political Leaders of the Nation States of the Americas.

"I am a leader of MY indigenous people - not the Prime Minister of Canada.” Likewise the Prime Minister of Canada is the leader of HIS non-indigenous peoples of the Neo-Colonial Political State of Canada. The OAS must find a way whereby the Indigenous Leaders of the Americas recognized by their own Indigenous Peoples - not merely representatives who may potentially have no actual mandate to speak on behalf of any Indigenous Nation - must be able to sit across the table from the Political Leaders of the 34 Neo-Colonial Nation-States of the Americas and have a genuine and equitable dialog for I believe this is the only way that over 500 years of inequity can be successfully addressed and redressed - in order to create a better future for generations to come.”

President Tony Belcourt of the ICCTA (Indigenous Commission for Communications Technologies in the Americas) spoke in detail about the need for a secretariat or Permanent Forum to be created by the OAS to allow for more effective participation by Indigenous Peoples within the OAS system. The suggested entity could function as a nexus between the Indigenous Leaders and Political Nation State leaders as Ovide had suggested.

Ellen Gabriel - the outgoing President of the Quebec Native Womens Association & Veteran of the crisis years of the 1990's (Oka crisis) that also propelled her to International Fame as a committed Indigenous Rights leader in Canada - raised the issue of the need to protect traditional knowledge as a way to mitigate and survive the Global Climate change that is already effecting us all – and Indigenous Peoples more severely than any others.

President Clement Chartier of the Metis National Association of Canada supported Ovide Mercredis call and added to what Tony Belcourt had said highlighting the fact that presently there exists no separate category in the OAS system for 'Indigenous Peoples' - and much to all our chagrin - we still fall under the broad (and inappropriate in our minds) category of 'Civil Society' which lumps us in with religious organisations, charities and sexual orientation advocacy groups; when in truth and in fact our issues are that of the intricately delicate relations between Colonizers and those they forcibly Colonized.

President Roberto Mukaro Agueibana Borrero of the United Confederation of Taino People (UCTP) - who has been almost singlehandedly pushing the agenda of Pan-Caribbean Indigenous Rights for over a decade - delivered a very enlightening presentation where he made several recommendations covering some areas not addressed previously. President Borrero exposed the fact that the UCTP had sent information from the 3rd ILSA (Indigenous Leaders Summit of the Americas) to virtually EVERY CARICOM (Caribbean Common Market) country asking them if they were aware of the issues being discussed with the OAS - which they are also members of - and asking for their official position on these matters. Unfortunately, true to their form of first decade of the 21st century not a single Caribbean Government had even the courtesy to respond.

Following the 5th Summit of the Americas and the 3rd ILSA (April 2009), the ONLY CARICOM government to report anything on the subject of Indigenous issues was the Government of Guyana. Unfortunately Guyana took the opportunity to blow it's own horn about its Amerindian Affairs Minister (a political appointee of the President of that country - NOT one voted for by any democratic majority of Guyana's 100 Amerindian Chiefs/Toushaus) and it's Ministry of Amerindian Affairs. In its official report to the OAS, Guyana says nothing of relevance about the Indigenous Leaders Summit of the Americas or OAS Draft American Declaration on the Rights of Indigenous Peoples process.

In conversation with President Borrero of the UCTP, Leilani Stewart, Vice President of the Pan-Tribal Confederacy of Indigenous Tribal Nations gave a very insightful analysis, which beautifully explained the validity of oral tradition as a vehicle to factually transmit information. Stewart also stress the need to strengthen the voice of Caribbean Indigenous Peoples through the well-positioned UCTP 'Indigenous media octopus'. President Damon Corrie of the Pan-Tribal Confederacy of Indigenous Tribal Nations pledged to supply the UCTP with as much information as he receives from allied communities in the Caribbean Region.