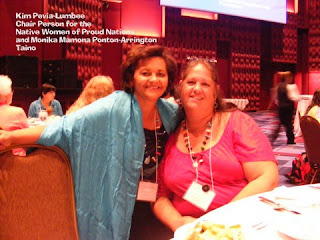 Cherokee, NC (UCTP Taino News) - The Conference for American Indian Women of Proud Nations (AIWPN) held a successful gathering September 16-17, 2010 at Harrah’s Cherokee Casino and Hotel in Cherokee, NC. The conference, held annually, was organized collaboratively by AIWPN, the Cherokee Preservation Foundation, and the Western Carolina University - Cherokee Center.
This year’s conference theme was “Nurturing and Empowering Our Communities Through Leadership.” The organizers noted that “women are increasingly taking on the mantle of leadership in a variety of ways. Although the rate of participation by women in tribal government and community leadership is still less than men, women play a significant role in tribal politics and community building.”

Native women from throughout the nation were welcomed to attend this conference, which offered statewide and national applications.

Among the attendees was Monika Mamona Ponton-Arrington, a Liaison Officer for the United Confederation of Taino People.

Expressing her feelings about the successful gathering Ponton-Arrington stated “I found that we [Native Women] are not that different, being indigenous and having our lands, languages, ceremonies, and housing destroyed. Our peoples were lied to, taken away, murdered, and sometimes even forced into various types of servitude. Our actions, thoughts, and feelings were very similar.”

Ponton-Arrington, a Boriken Taino also stated “there was so much to speak about and not enough time.”