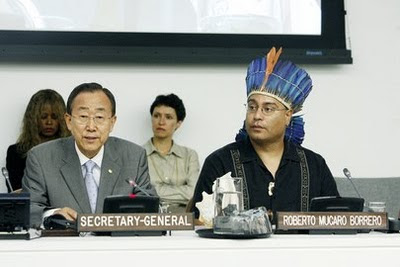 Secretary-General Ban Ki-moon addresses UN Headquarters' event in observance of the International Day of the World's Indigenous Peoples. At right is Roberto Múkaro Agueibana Borrero, Master of Ceremonies for the event.
(UN Photo/Evan Schneider)
UNITED NATIONS (UCTP Taíno News) - The United Nations celebrated the International Day of the World's Indigenous Peoples on August 9, reaffirming indigenous rights and presenting several short films produced by indigenous filmmakers. Caribbean Indigenous Peoples, the Taíno in particular, were a featured part of the event commemorated at UN Headquarters.
The program was called to order with the sounding of the guamo (conch shell horn) by Roberto Múkaro Agueibana Borrero (Taíno) who served as the program’s Master of Ceremonies. 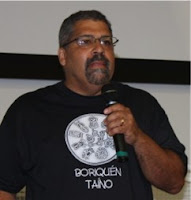 Four short films were presented during the event including "Taíno Indians: Counted out of Existence" by Alex Zacarias (Taíno). Zacarias is an Emmy-award winning documentary film maker whose family comes from Bieke (Vieques). His film deals with the Taíno People's struggle for recognition in Borikén (Puerto Rico).

“It was an honor to be part of this important event and share with others; not only our Taíno people but also with other Indigenous Peoples” said Marrero. “The program was very educational.”