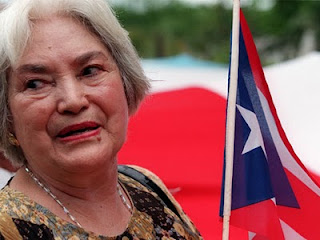 San Juan- The Nationalist heroine, Lolita Lebrón, who was jailed a quarter century in the United States for leading a commando attack on the Congress, died at 11:05 am today.
The 89 year old Puerto Rican nationalist leader was in a hospital in San Juan for a few weeks due to cardio respiratory complications she could not overcome, sources said.

"We were very anxious about the clinical picture presented in the last few hours and certainly expected this sad and painful end at any time," International News Service said a source close to the family, who declined to be identified.

Lebrón was active in the struggle for the independence of Puerto Rico until her last breath, as relatives explained that only the deterioration of her health prevented her from being present in the latest protests in the country.

She also regretted not being able to be in the welcoming last Tuesday of former Puerto Rican political prisoner Carlos Alberto Torres, as she was already very poor health. Torres spent 30 years in prison in the U.S. for "seditious conspiracy" related to the struggle for independence as a suspected member of the Armed Forces of National Liberation (FALN).

Lebrón led an integrated command team in 1954 that included Rafael Cancel Miranda, Irving Flores and Andrés Figueroa Cordero, who remained imprisoned for 25 years before being pardoned in 1979 by President Jimmy Carter in the wake of an intense international campaign.

The action sought "to denounce to the world the farce of the Commonwealth," a system of government that had been founded in 1952 to remove Puerto Rico from the list of colonies.

On one occasion, nationalist leader stated that the attack on the U.S. Congress did not intend to cause the death of any congressman and, on the contrary, members of the command intended to blow themselves up because they thought they would be killed there.
Source: El Nuevo Día
Translated from Spanish by NiLP
Posted by UCTP TAINO NEWS at 11:08 PM