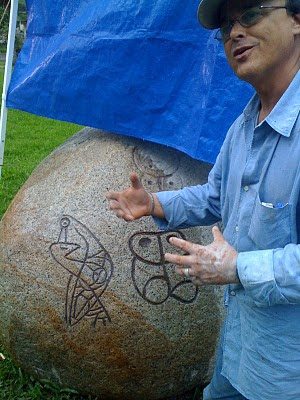 Jayuya, Boriken (UCTP Taino News) – Master carver and archeologist Robinson Urayoan Rosado is preparing a commemorative monument for renowned artisan Elpidio Collazo González “Maboití” at the Centro de Arte y Cultura Elpidio in Jayuya, Boriken (Puerto Rico). Collazo, who passed away in 2007, was one of the island’s most illustrious carvers of local bird life from wood.

Carving into a 3 ton stone from the local area, Urayoan’s (Robinson Rosado) tribute is fitting as it features Taino bird pertroglyphs. The monument will be a center piece of the cultural center where Maboití and his family spent much of their time. The center is home to the Cemi Museum, the Casa Canales, and the CATTA-COOP artisan collective.

Explaining the metaphoric significance of these carved bird representations, Urayoan expressed his pleasure in participating in this project with the approval of the Jayuya municipal council.

Urayoan’s nearly completed inspirational tribute to elder Maboiti was a fitting compliment to the greeting and reception of the Borikén 2010 Peace and Dignity Run. To support the historic run the municipal government of Jayuya and CATTA-COOP hosted the runners, Taino leaders, visiting indigenous dignitaries, and supporters at the cultural center over the weekend.