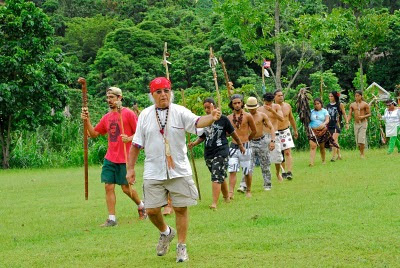 Runners for Peace and Dignity Boriken 2010. (Photo: Amy Ponce)
Borikén/Puerto Rico (UCTP Taino News) – The Borikén 2010 Peace and Dignity Run began on the 17th of July with the sounding of many guamo (conch shell horns) at sunrise in the Yunke Rainforest. A spiritual event, the run is being undertaken to raise awareness about the condition of indigenous scared sites on the island as well as connect native Taino islanders with their mainland relations. At the special opening ceremony, runners received the blessing of elders and other community members as they began an historic journey that would take them to sacred sites all around the island.

The runners – who are representing community members residing on and off the island - have the responsibility to carry a number of sacred staffs representing the “prayers of the people”.

The participants of the Boriken 2010 Peace and Dignity Run have already completed runs in the east, south, and western regions of the island. The runners and supporters are now on their way north. After the northern area run, the group will begin their journey to the central region where ceremonies will take place in the towns of Jayuya and Utuado.

Indigenous delegates from Kiskeia (Dominican Republic) and Waitukubuli (Dominica) will join the Borikén Taino in solidarity to participate in the ceremonial closing events this weekend.