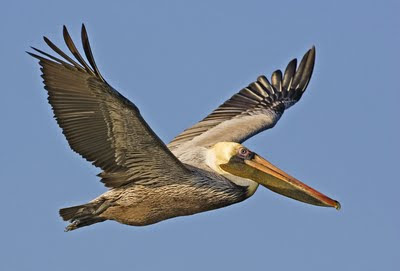 Washington, DC (UCTP Taino News) — After being pushed to near extinction caused by pesticides, hunters, and the loss of habitat the brown pelican was removed from the endangered species list on Wednesday, Nov. 11, 2009.

"We can all celebrate this victory for our sacred relative.” stated Roger Guayacan Hernandez, a Liaison Officer for the United Confederation of Taino People in Boriken (Puerto Rico).

“Our ancestors saw the Aruna (the brown pelican) and many other water birds as spiritually significant” continued Hernandez. “In many ways, the Aruna is a symbol for the conservation of the region’s wildlife as it took real dedication and partnership between government, conservation organizations, and concerned individuals to archive this success.”
Aruna is the ancient Arawak word for the brown pelican.

According to reports the Aruna population is now back up to more than 650,000 of the birds across Florida, in the coastal regions of the Gulf of Mexico and Pacific Ocean, and in the Caribbean and Latin America.

The Aruna still faces threats including habitat loss from Global Warming. The U.S. Fish and Wildlife service will continue to monitor its progress working with agencies and organizations in Mexico, Boriken, and the U.S. Virgin Islands.
UCTP 11.12.2009
Posted by UCTP TAINO NEWS at 4:29 PM

Just wondering if this bird will be put back on the endangered species list because of the Gulf Oil Spill.
Steve