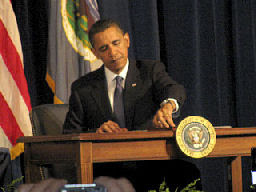 President Barack Obama signed a memorandum on tribal consultation at the White House Tribal Nations Conference, which took place at the Interior Department in Washington, D.C., on Thursday, November 5.
The memo directs all federal agencies to submit a "detailed" tribal consultation plan in the next 90 days. A progress report will be due in 270 days.

"History has shown that failure to include the voices of tribal officials in formulating policy affecting their communities has all too often led to undesirable and, at times, devastating and tragic results," Obama stated. "By contrast, meaningful dialogue between Federal officials and tribal officials has greatly improved Federal policy toward Indian tribes."

The memo also directs the White House Office of Management and Budget to submit a report on the implementation of the tribal consultation policies by the agencies. The report is due in one year.