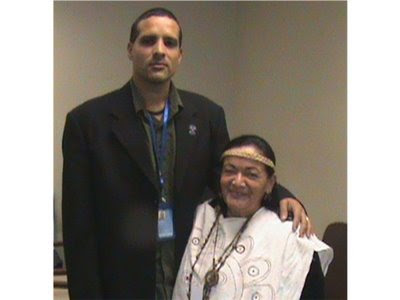 I first met Grandmother Karaira (aka 'Millie') in 2008 during my first year of Tribal Link Foundation’s “Project Access Global Capacity Building Training for Indigenous Peoples” in New York. She is fiercely proud of her Boriken Taino heritage and for those who don't know - she'll remind you that Boriken is the true name of the island the Spanish Conquistadors later called 'Puerto Rico' (Rich Port).

I remember how Grandmother Karaira used to bring food for me each day ‘Just to make sure I had something to eat', and this was entirely out of the kindness of her heart and of her own volition.

Concerning the entire group of Tribal Link trainees (both 'freshmen' and 'alumni') – Karaira always has grandmotherly advice and words of wisdom for everyone. She often sat in the background and listened, waiting for the spirit of the ancestors to move her to single out anyone she senses is in dire need of prayer or counsel. On my last night in New York I was in a bit of mental anguish over a lingering issue I was trying to find a way to cope with, grandmother Karaira called me over and said privately to me "I feel I need to talk to you about something, you can tell me if I am wrong, but I sense that...".

She went on to very precisely give the direction I was looking for - to the specific issue I was pondering.

If I had let slip even a hint or single word at any time during my almost 3 weeks in New York about this private matter it would have been easy for someone to make an educated guess, but I never said a word even remotely concerning this topic; so Karaira was genuinely in tuned on a spiritual level to obtain the insight she did.

This however, was by no means the first time, last year during a ceremony she gave me a blue Parrot feather, I had been told in a dream over 20 years ago (when I was still a teenager) by a voice that said "Now you know how to reach me - when you pray, use the feathers".

I had accumulated over the years the other feathers that I traditionally required, and the Blue Parrot feather was the last one I needed. I never told anyone about that dream yet she knew I needed that specific gift.

Among Indigenous Peoples these are normal occurrences, but to many non-indigenous - these are considered to be quite remarkable.

The Taino and Lokono Arawaks are closer blood relations than almost any other two indigenous tribes in the Western Hemisphere, and this historic bond of kinship was fractured by the consequences of the arrival of un-civilized Iberians into our lands over five centuries ago. In modern times my own Bariria Korobahado Lokono (Eagle Clan Arawaks) have cemented an alliance with the United Confederation of Taíno People (UCTP) - to which Grandmother Karaira is a representative officer.

The UCTP was founded by Tainos from Boriken, Kiskeia, and Cuba but it has been Boricuas who have been spearheading the Taino revival in the Greater Antilles and beyond. It is a mammoth effort with the UCTP taking a principle role internationally. I am honored to be a fellow Council member.

Likewise, well-known UCTP supporter and Taino artist Aguilar Marrero was granted a life seat on the Eagle Clan Tribal Council. UCTP President Roberto Mukaro Borrero remains the first and only official advisor to the multi-racial and worldwide Pan-Tribal Confederacy of Indigenous Tribal Nations, which was founded by the Eagle Clan Arawaks.

Before I conclude I just want readers to know that with the strokes of their pens - former Spanish colonial governors in Puerto Rico, the Dominican Republic and Cuba re-classified 'Indios' as 'Mestizos' or ‘Mulattos’ - an act which instantly had the effect of Taino people officially ‘disappearing' from the population census records of those islands. So do not succumb to the erroneous and widely held belief that 'the Tainos are extinct'.

Cuba recently revised their official inherited false colonial era curriculum to now admit to the continued existence of Taino people in Eastern Cuba - who have kept many of their traditions and cultures intact, and the recent official DNA tests conducted in Puerto Rico conclusively proves the continued biological existence of Tainos there. That is just in case anyone failed to notice the very highly visible modern day Taino cultural activities that have been increasing publicized.

Still there are people in western societies who are so ignorant that they utter nonsense such as "You guys do not wear loincloths, paint and feathers anymore – so you are not really Arawaks" - to which I often respond by asking them: "Do you still wear the attire your ancestors wore 500 years ago?". Actually I do still own and wear loincloths, paint my body etc. - but when I am among my own people and on our own lands as an outward expression of inward cultural pride.

I do not however do so in an urban context among the imposed and dominant foreign culture there. The old saying "when in Rome do as the Romans" does have some merit I think. In the end, we all know who we are and it matters not the depth of ignorance exhibited by others.
Author: Damon Gerard Corrie
Reporting from the Eighth Session of the United Nations Permanent Forum on Indigenous Issues, New York City, 18-29 May 2009
e-mail: damoncorrie@yahoo.com
Posted by UCTP TAINO NEWS at 3:14 PM