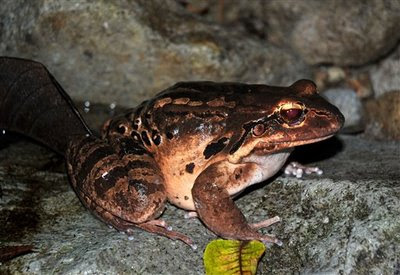 In this photo released by the Durrell Wildlife Conservation Trust, an adult female mountain chicken frog in healthy condition is shown during a night survey at Fairy Walk in the Caribbean island of Montserrat on March 6, 2009. Scientists are airlifting to Sweden and Britain one of the world's largest frogs out of the tiny island of Montserrat to save it from a deadly fungus devastating its dwindling habitat that has been nearly destroyed by the temperamental Soufriere Hills volcano. (AP Photo/Gerardo Garcia, Durrell Wildlife Conservation Trust)
SAN JUAN, Puerto Rico (AP) — Scientists are airlifting dozens of one of the world's largest frogs off of Montserrat island to save them from a deadly fungus devastating their dwindling habitat. The dense forest of this tiny British Caribbean territory is the last remaining stronghold of the critically endangered mountain chicken frog, a 2-pound (0.9 kg), frying pan-size amphibian that got its name because locals say its meat tastes like — you guessed it — chicken.

Once eaten as a delicacy, the frog was hunted and much of its habitat on Montserrat was destroyed by the temperamental Soufriere Hills volcano. Now experts fear a virulent fungus could decimate the few thousand frogs they estimate survive.

"Its impact has been catastrophic," Andrew Cunningham, senior scientist with the Zoological Society of London, said of the chytrid fungus. "The mountain chicken frog has been virtually wiped out."

Experts have found 300 dead frogs and believe hundreds more have perished since the fungus surfaced in late February, said Gerardo Garcia, director of the herpetology department at the British-based Durrell Wildlife Conservation Trust.

To save the frogs, scientists are giving some of them anti-fungal baths and scooping up dozens of others and flying them at a total cost of $14,000 to zoos in Britain and Sweden, where they live in temperature-controlled rooms with automatic spray systems. About 50 have been flown off the island.

Biologists clad in full paper suits will care for them until they are released.

"We're in a situation where the species could become extinct forever," Garcia said.

Frogs should ideally be kept in their natural habitat, but flying them out was the only short-term solution, said Andrew Terry, Durrell's conservation manager. They would not have enough to eat if restricted to fungus-free areas, he said.

The fungus already has devastated the mountain chicken on Dominica, a nearby island that once served as the frog's other home and whose coat of arms bears the amphibian's image.

Natives on both islands used to favor the frog's meaty legs, although it is mostly tourists now who request them, said Gerard Gray, director of Montserrat's Department of Environment.

Experts are still trying to figure out how to eradicate the fungus, which has killed a range of frog species from Asia to South America.

Chytridiomycosis causes lethargy and convulsions, and thickens the skin that frogs breathe through.

Mountain chickens are nocturnal animals that live in rough terrain, making them hard to find to get an accurate tally of their numbers, Gray said. Scientists estimate a few thousand live on Montserrat.

The large frogs sound like a small howling dog when they croak.

Gray remembers the night he heard a mountain chicken croak and it was so loud he thought it had crawled under his bed.

"My wife laughed at me," he said. "It was in the forest where it was supposed to be."

Hunting aside, the number of frogs already were dwindling in Montserrat because of the active volcano. It has erupted continuously since 1995 and forced more than half of the island's 12,000 people to leave.

But the volcano might prove to be the frog's ultimate savior. Local officials hope to relocate the frog to a region cut off by lava and ash that is inaccessible by foot, and — they hope — free of fungus.