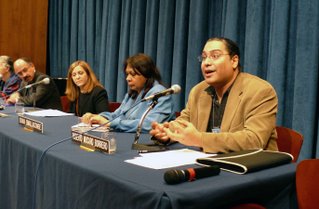 The briefing looked at the traditional lifestyles, practices, and struggles of indigenous peoples around the globe. H. E. Mr. Javier Loayza, Chargé d’affaires, Permanent Mission of Bolivia to the United Nations; Ms. Sonia Smallacombe, Social Affairs Officer, Secretariat of the Permanent Forum on Indigenous Issues; and Mr. Roberto Mucaro Borrero, Chairperson of the NGO Committee on the International Decade for the World’s Indigenous People discussed the needs, rights, and challenges of indigenous peoples in maintaining their traditional cultures, environmentally sound relationships with the land, and sustainable use of natural resources.

H.E. Mr. Javier Loayza initiated the discussion by emphatically noting, “We do not own the land, we belong to it.” He explained that this quote reflected the thinking, spirituality, and daily lifestyles of indigenous peoples. According to Mr. Loayza, the concept of privatized territory was absent from the philosophy of indigenous communities, who regard the land as a living space that provides resources. Mr. Loayza emphasized that it was vital to remember that vision when confronting the current crisis of climate change, which was rooted in the longstanding dominant economy of privatization that transformed the natural environment, irresponsibly exploited resources, and created a “socially unjust model” which “has rendered our world inhospitable.” He explained that indigenous peoples had been the victims of that unjust model since colonizers invaded and misappropriated their lands, and further stressed the polarization between the “haves” and “have nots” around the world. Mr. Loayza described the sociopolitical changes underway in as a victory for indigenous peoples in the spirit of plural national justice. The Bolivian government was making efforts towards advancing the needs and equity of indigenous peoples and translating indigenous issues into tangible policies to help protect their environments, explained Mr. Loayza. He concluded that he hoped the cosmo-vision of the indigenous peoples would inspire the world to change their current unsustainable practices in the face of environmental degradation.

Ms. Sonia Smallacombe described the work underway for the upcoming Permanent Forum on Indigenous Issues. Its major themes of territories, lands, and natural resources include a number of related issues such as forests, desertification, sustainability, and biological diversity. According to Ms. Smallacombe, the long struggle of indigenous communities to gain recognition of their rights lied at the heart of the permanent forum; however, the draft Declaration of the Rights of Indigenous Peoples continued to remain under review and negotiation. She described the Permanent Forum as a unique international body that brought together indigenous peoples, governments, civil society, and United Nations agencies to make recommendations to ECOSOC. Indigenous leaders could offer their traditional knowledge and best practices. Ms. Smallacombe emphasized the importance of the direct participation of indigenous peoples in UN activities. She further noted the vital role that language played in keeping traditional knowledge alive, which was preserved by speech and oral traditions. The death of aborigine elders was equivalent to the burning down of a library, explained Ms. Smallacombe. She concluded by underscoring the threat of the climate change crisis in endangering the traditional lifestyles and homelands of indigenous peoples, particularly those in small Pacific Island states and the Caribbean where the water levels were rising and those in African regions blighted by desertification.

Mr. Borrero further highlighted the importance of language and communication in preserving the stock of traditional knowledge among indigenous communities throughout the world, but warned of the dangers in over-generalizing the circumstances of indigenous communities. He noted that they had different realities, but similar reactions and responses to their histories of maltreatment and victimization. According to Mr. Borrero, there were prominent linkages between the current situation of indigenous peoples and their past interactions with colonizers who took advantage of them. Speaking from a historical perspective, Mr. Borrero explained that the tragic history of the relationship between the colonizers and indigenous peoples extended far beyond the simple act of conquering and also involved unfulfilled promises and broken treaties. He cited the example of the double wampum created by Native American tribes in symbolizing their intention of living in harmony with the European settlers, which never came into fruition. Mr. Borrero further underscored the linkages between the development of dominant economic models and the climate change crisis along with the connections among social justice, implementation, and benefit sharing. In conclusion, Mr. Borrero urged all NGOs to support of the Declaration of the Rights of Indigenous Peoples and lobby for its passage.

During the question and answer period, Mr. Loayza noted that NGOs had a special duty advocate for the acceptance of the Declaration of the Rights of Indigenous Peoples in all levels of government. Mr. Borrero further stressed the importance of the Declaration by explaining that it was the product of 20 years of negotiation, which had recently been compromised by a few governments’ calls for revisions. He strongly urged NGOs to oppose the renegotiating of the text and support its timely adoption.

This briefing held at United Nations headquarters on April 19 was organized by the Department of Public Information, and the Secretariat of the Permanent Forum on Indigenous Issues in cooperation with the NGO Committee on the UN International Decade of the World's Indigenous Peoples.
Posted by UCTP TAINO NEWS at 11:08 PM