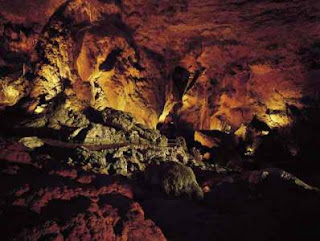 Caves are an important part of Taino mythology and the Taino believed the first peoples of Hispaniola came from two caves in a mountain named Cauta. The ancestral Taino emerged from one cave, Cacibajagua, while the ancestors of the non-Taino peoples came out of another, Amayauna. The Taino [of Hispanola] also believed the Sun and the Moon emerged from a cave called Iguanaboina. Caves were intimately associated with the spirits of Taino ancestors, whose worship was a central element of Taino religion. They believed their universe consisted of three layers united by a vertical axis. The earth’s surfaces lay in the middle, with the celestial vault above. The bottom layer was a watery underworld known as Coaybay or dwelling place of the dead. Access between the earth’s surface and the underworld was by way of sacred caves. These were portals to Coaybay and the ancestors.

The Taino also believed that the island of Hispaniola was a monstrous living beast. The head of the monster was at the eastern end of the island, in the chiefdom of Higuey. Two caves in Higuey were seen as the beast’s eyes. Another connection between caves and the ancestors is that caves are homes to colonies of bats. The Taino believed that the spirits transformed themselves into bats. They would hide during the day and come out at night to eat the fruits of the Guava tree. These spirits of the dead were called opias and the bat is one of the most frequently depicted animals in Taino art.

I have been visiting various blogs for my term papers writing research. I have found your blog to be quite useful. Keep updating your blog with valuable information... Regards