The UCTP pauses to offer its sincere condolences to the family of Hans Koning who died on Friday at his home in Easton, Conn.

His “Columbus: His Enterprise — Exploding the Myth” was published in 1976, and reprinted in 1992, the 500th anniversary of Columbus’s voyage. Mr. Koning's factual portrayal of Columbus and his exploits sold 30,000 copies just in 1992. The book is still in print and commonly used high-school text.

Mr. Koning is survived by his wife, the former Kate Scanlon; his daughters Christina, of London, Tess Koning-Martinez of San Francisco and Lynne Koningsberger of the Netherlands; and his son, Andrew, of Manhattan. 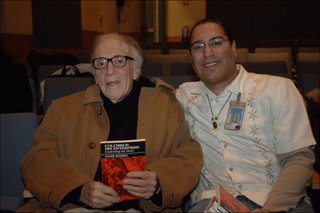 Hans Koning, author of “Columbus: His Enterprise — Exploding the Myth” with UCTP President Roberto Mucaro Borrero at the American Museum of Natural History in January 2007. Photo: R. Mickens, AMNH
Posted by UCTP TAINO NEWS at 11:47 AM