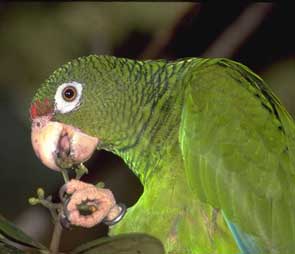 SAN JUAN, Puerto Rico (AP) - Twenty-one Puerto Rican parrots raised in captivity will be released - a first attempt to create a new population of the threatened species by reintroducing it into an area where it previously existed, U.S. wildlife officials said Wednesday.

The parrots - which are bright green with a red forehead and wings that flash turquoise in flight - will be let go at the Rio Abajo aviary in Utuado on Sunday, the U.S. Fish and Wildlife Service said in a statement.

The Rio Abajo forest in central Puerto Rico was the last place the parrots were documented in the wild before they sought shelter from humans in the Caribbean National Forest, a mountain rain forest known to Puerto Ricans as El Yunque, said the wildlife service, which has conducted previous releases of the parrots.

The parrot population has suffered at the hands of humans, who snatch them for pets, and from the forces of nature - including hurricanes. It is listed on the World Conservation Union's "Red List" as a threatened species.

The bird - called "Iguaca" by the Taino Indians after the sound of its squawk - was plentiful when Columbus arrived in the Americas and coexisted with a Puerto Rican macaw and parakeet that have since died out.