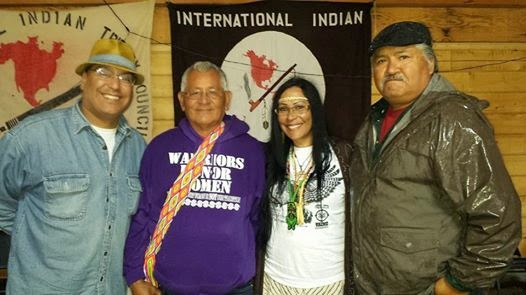 The IITC conference addressed the ongoing challenges faced by Indigenous Peoples throughout the Americas, the Caribbean, and the Pacific such as racism, food sovereignty, environmental health, climate change and reproductive health, among others. Campsites and meals were provided to the local and international participants. Two buffalos were donated from the Inter-tribal Bison Cooperative one from South Dakota and one from the Cheyenne and Arapaho Nation, to feed attendees at the conference.
Various dynamic issues panels were convened and conference participants adopted a number of resolutions for IITC work focus for the next year and beyond. Three organizations requested and were approved as IITC affiliates by the conference general assembly; among them was the Caribbean Amerindian Development Organization (CADO).
The International Indian Treaty Council is an organization of Indigenous Peoples from North, Central, South America, the Caribbean, the Arctic, and the Paciﬁc working for the Sovereignty and Self-Determination of Indigenous Peoples and the recognition and protection of Indigenous Rights, Treaties, Traditional Cultures and Sacred Lands. Since 1977, the IITC has been recognized by the United Nations as a category II Non-governmental Organization (NGO) with Consultative Status with the UN Economic and Social Council, making it the first indigenous NGO to gain such status.