YES – THERE ARE AMERINDIAN CHILDREN IN BARBADIAN SCHOOLS! Opinion from Damon Corrie 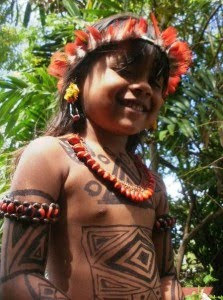 "My wife and I kept our last daughter Laliwa Hadali (Yellow Butterfly of the Sun) home from school on Friday January 28th 2011 today because it was her 4th birthday, and 4 & 9 are sacred numbers to us."
Fellow Barbadians,

I am tired of my own Arawak children and other Amerindian children in Barbadian schools (some 40 children in all) being told by mis-educated or ill-informed teachers that the tribe to which they belong ‘no longer exists’ so therefore they cannot possibly be who they say they are. For the information of these ’educators’ there are almost 20,000 Arawaks STILL in Guyana, 2,000 in Suriname, about 1,000 in French Guiana, and around 200 in Venezuela to this day! Also for the record – we do NOT call ourselves ‘Arawaks‘, it is not even a word in our language, we call ourselves ‘Lokono’ which means in English ‘The People’ (Columbus nearly got it right when he wrote that the name of our tribe was ‘Lucayo’); but for the sake of familiarity I shall use the word ‘Arawak’ throughout this letter.

Also good to note is the fact that the word ‘Amerindian’ is merely an abbreviation of two words ‘American‘ and ‘Indian‘, so technically it can be correctly used to describe any Indigenous tribe of the Western Hemisphere except the Inuit (mistakenly called ‘Eskimos‘); many erroneously believe that 'Amerindians' are from Guyana and 'American Indians' are from the USA; but we are all one indigenous race in this so-called ‘New World‘ – just different tribes.

I decided to write this article to hopefully open the minds of my fellow citizens to a little-known (seemingly ‘unknown‘ as far as I can tell) fact about our multi-ethnic Society. My maternal grandmother emigrated to Barbados from Guyana in 1925 with her 5 other siblings and mother – who was the sole surviving child of the last Hereditary Lokono-Arawak Chief in Guyana. My Great grandmother Princess Marian was the first member of the ruling family of her tribe to be Christ

ianised and receive a Western Education, this was done by the Anglican missionary Reverend Percy Austin who was trained at Codrington College in Barbados before being sent into the interior of Guyana among the indigenous tribes; Rev Austin later became the Bishop of Guyana.

Though accepting of Christianity, Great-grandmother – as do I, my wife, and our children, never rejected her Arawak religious beliefs and maintained them BOTH throughout her life, for they are compatible if you know the core values they both espouse.

In the Arawak tribe there is no word for ‘Prince‘ or ‘Princess‘, the children of the traditional leader of the tribe (which was always a hereditary position) were merely called the ‘Sons or daughters of the Chief‘. It was the English speaking British colonial society who gave my Great grandmother the title of ’Princess Marian of the Arawaks‘ when she was introduced to the then visiting Prince of Wales who visited Guyana in the early 1920′s; so out of respect that title remained with her for the rest of her life.

Great grandmother died in Barbados in 1928 and is buried here in Westbury Cemetary – the only known burial site of an Arawak noble in the entire English-speaking Caribbean. Her daughter Hannah, who is my beloved grandmother – is 97 years old and still alive, residing on ‘Arawak Road in Chancery Lane (no pun intended); however all of her 5 other siblings are now deceased. My grandmother married Barbadian George Cecil Corbin, her sister Ruth married Barbadian Philip Serrao, and sister Martha married Barbadian Keith Chandler – and from these 3 sisters who spent the rest of their lives here there are just over 100 persons of Arawak descent in my family born in this country, and about 20 of them are still students within the educational system of Barbados; not mentioning at least 20 more Amerindian children I know personally at school in Barbados today.

My wife and I kept our last daughter Laliwa Hadali (Yellow Butterfly of the Sun) home from school on Friday January 28th 2011 today because it was her 4th birthday, and 4 & 9 are sacred numbers to us. All Arawak children will traditionally receive Yuri (Tobacco) smoke blessings at the age of 4 & 9 and have a song written for them on each of those birthdays, if a girl, her next song will be the longest and one she must memorise for the rest of her life during her 9 day long puberty rite of passage, my eldest daughter may have hers any day now, it is determined by the appearance of the first menses and not by age; she is 12, some see it at 11, some 13.

The puberty rite will be the first and most important rite of passage for my daughters, second is her marriage ceremony, 3rd her first childbirth, and 4th her first grandchild being born; but the puberty rite is the FOUNDATION for all that follow and will determine the positivity/negativity of those that follow it.

If my daughter’s time comes during the school term – we as her parents will have no choice but to keep her at home for those 9 days so that her rite can be completed according to our ancient traditions and religious practises; and according to the United Nations Declaration on the rights of Indigenous Peoples which the Government of Barbados (as well as every other Government on Earth) has officially endorsed, we have the right to do this.

Article 11 of the United Nations Declaration on the Rights of Indigenous Peoples reads:

1. Indigenous Peoples have the right to practise and revitalise their cultural traditions and customs. This includes the right to maintain, protect and develop the past, present and future manifestations of their cultures, such as archaeological and historical sites, artifacts, designs, ceremonies, technologies and visual and performing arts and literature.

Article 12 of the United Nations Declaration on the Rights of Indigenous Peoples reads:

This brings me to the point of Barbadian Society, I applaud the accommodations that the Ministry of Education has made for Muslim children, for Hindu children, for Rastafarian children, and all I now ask is for the same respect to be shown for Amerindian children who follow their traditional religious beliefs – such as my own children.

PS - here is the song I wrote for my daughter on her birthday – and sang to her that night as we asked for the Creator to bless her.

Happy Birthday to your daughter Laliwa Hadali I guess she is 5 now :) she is beautiful. Im from Puerto Rico and at school we were told that all of our Taino blood lines no longer existed. Recenty I had a DNA test done it revealed that I am of indigenous descent on my mothers side.