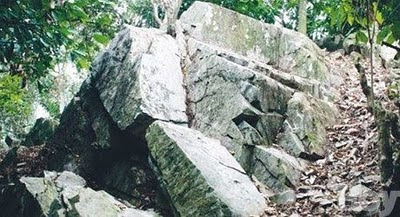 Kiskeia/Dominican Republic (UCTP Taino News) – Investigations in the Dominican Republic have confirmed that recently discovered ‘stone pyramids’ are not pre-Colombian structures but natural formations. An impressive team of researchers gathered to investigate the claim emerging from the Puerto Plata municipality.
According to local reports the research investigation team included local archaeologists Jorge Ulloa and Joaquin Nadal as well as Alfredo Coppa and Alice Angeletti from Universita La Sapienza in Rome. Geologist Tabare Mundaray Baez and Pauline Kulstad of the Caribbean Association of Archaeologists were also a part of the delegation.

The research team determined that the large lime stone formations were the result of natural land shifts.
UCTPTN 11.05.2006
Posted by UCTP TAINO NEWS at 2:48 AM

Email ThisBlogThis!Share to TwitterShare to FacebookShare to Pinterest
Labels: Kiskeia