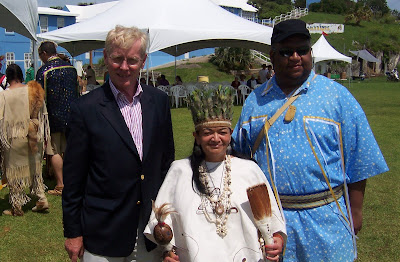 The Honorable Governor of Bermuda, Sir Richard Gozney, UCTP Liaison Mildred Karaira Gandia, and Stephen Tucker, Chairman of the St. David’s Islanders and Native Community in Bermuda. (UCTP Photo)
Saint Davids, Bermuda (UCTP Taino News) - An historic "Declaration of Unity" was ratified this month between the St. Davids Islanders and Native Community of Bermuda and the United Confederation of Taino People (UCTP). The treaty was the result of a diplomatic process that began in June during a local indigenous celebration of Bermuda's 400th Anniversary.

Mildred Karaira Gandia (Boriken Taino) was the Confederation's representative who undertook the diplomatic mission to Bermuda. Karaira facilitated the treaty process in coordination with Tucker "Brinky" St. Clair of the Saint David's Islander and Native Community.

"The Taino could not have had a better representative to our community" stated Tucker, a community Council member.

The Declaration of Unity promotes solidarity between the Saint David's Islanders and Native Community and the Taino at the local, national, and international levels.

“This Declaration is significant politically and spiritually” stated Karaira.

“With our unification we strengthen our voices in the region as we continue to promote the teachings of our ancestors by reuniting our indigenous family.” She continued stating “This is for our future generations.”

The Saint David’s Islanders and Native Community represents the descendants of Indigenous Peoples who were taken to Bermuda as part of the slave trade from the United States and Caribbean during the 1700s. The UCTP represents Taino People throughout the region and the Diaspora.