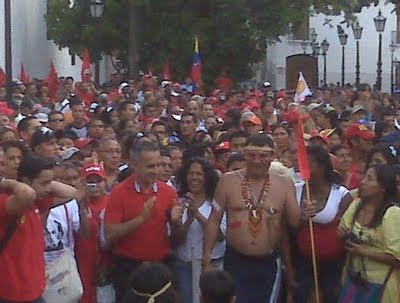 Caracas, Venezuela - Celebrating 517 years of indigenous resistance to invasion and colonisation Venezuela marked Indigenous Resistance Day on Monday with a street march through the capital, Caracas, the granting of title deeds to indigenous communities, and a special session of the National Assembly.

Across the Americas October 12 is widely celebrated as Columbus Day, the day in 1492 when Christopher Columbus, representing the Spanish Crown, first arrived in the Americas. In 2004 the Venezuelan government officially changed the name to Indigenous Resistance Day.

In Caracas, thousands of members of Venezuelan President Hugo Chavez's United Socialist Party of Venezuela (PSUV), together with members of Venezuela's 44 indigenous groups, marched to the National Pantheon, in order to celebrate achievements for indigenous peoples under the Chavez government and claim their rights as the original inhabitants of the country.

A special session of the National Assembly then took place in the Pantheon, where the remains of 16th Century Indigenous Cacique (Chief) Guaicaipuro lie as well as those of Venezuelan independence leader Simon Bolivar, who fought against Spanish colonialism.

"Today we join in this celebration of Indigenous Resistance Day, the day of the dignity of the indigenous peoples of Latin America and particularly of the Bolivarian and Revolutionary Venezuela," stressed the minister.

Yupka community spokesperson Efrain Romero said, "It's historic to receive title to the lands we inhabit," and added, "We reaffirm our fight for this revolution to continue advancing (...) we reaffirm our support for President Hugo Chávez."

In recent years the Sierra de Perija region has been the scenario of a fierce conflict between large "landowners" and the indigenous communities who were forcibly driven off their lands during the Perez Jimenez dictatorship in the 1940s.

The situation came to a head in July 2008 when Yukpa indigenous communities occupied 14 large estates to demand legal title to their ancestral lands. Estate owner Alejandro Vargas and four others, armed with guns and machetes, responded by attempting to assassinate the Yukpa cacique (chief) Sabino Romero, who was leading the occupations, and beat and killed Romero's elderly 109-year-old father Jose Manuel Romero.

Then on August 6 hundreds of armed mercenaries, hired by large landowners, attacked the indigenous communities.

At the time Venezuelan President Hugo Chavez slammed what he described as the "ambiguous attitudes" of some government functionaries in dealing with the land demarcation process and ordered an investigation into the violent attacks.

"There should be no doubt: Between the large estate owners and the Indians, this government is with the Indians" Chavez said.

During his speech today El Aissami emphasised that the delivery of title deeds of land to indigenous peoples is one of the policies promoted by the National Executive to ensure comprehensive recognition of the ancestral territorial rights of indigenous peoples.

Sergio Rodríguez, a spokesperson for the Environment Ministry clarified that other areas belonging to Yukpa communities are yet to be demarcated but said the ministry, together with the indigenous communities and other agencies that comprise the National Demarcation Commission, "will continue to work to resolve the situation. Our goal is to provide land titles to those Yukpa sectors that lack them by the end of the year."

However, another dispute in the Sierra de Perija region between the Barí, Yukpa, and Wayúu indigenous peoples resisting coal mining on their lands on the one hand and the state-owned Corpozulia, still has not been fully resolved.

The government is also expected to hand over title deeds covering 5,310 hectares to the 366 strong Palital community, belonging to the Kari'ña ethnicity in the state of Anzoategui.

Speaking at the closing ceremony of the III Congress of the Great Abya Yala [the Americas] Nation of Anti-Imperialist Indigenous Peoples from the South in the remote Amazonas state, Minister for the President's Office, Luis Reyes Reyes, also granted credits to representatives of indigenous communities to assist in agricultural production.

Despite many unresolved issues, indigenous peoples have made significant advances in Venezuela over the last 10 years. The Bolivarian Constitution adopted in 1999, through Art. 8 specifically emphasises recognition and respect for indigenous land rights, culture, language, and customs. According to the constitution, the role of the Venezuelan state is to participate with indigenous people in the demarcation of traditional land, guaranteeing the right to collective ownership. The state is also expected to promote the cultural values of indigenous people.

Article 120 of the Constitution also states that exploitation of any natural resource is "subject to prior information and consultation with the native communities concerned."

In 2003 the government also initiated the Guaicaipuro Mission, a social program aimed at the promotion and realization of indigenous rights as recognised in the constitution.

Venezuela's indigenous people, who comprise approximately 1.6% of the population, also have three indigenous representatives in the National Assembly.