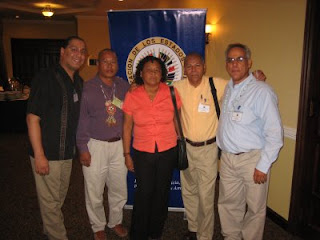 Caribbean indigenous delegates at the 3rd Indigenous Leaders Summit of the Americas being hosted in Panama. From left to right: Roberto Borrero (Taino), Chief Allan Leow (Lokono), Margaret Williams (Kalinago), Chief Charles Williams (Kalinago), and Roger Guayakan Hernandez (Taino). UCTP Photo.
Panama City, Panama (UCTP Taino News) - The 3rd Indigenous Leaders Summit of the Americas opened today with a blessing from Gilberto Arias, a traditional leader of the Kuna Peoples of Panama. Arias asked the Great Spirit, Baba and Nana, Mother Earth, to assist the delegates who arrived for the meeting from South, Central, and North America as well as the Caribbean.

The morning session included remarks from Mr. Betanio Chiquidama representing the Kuna Council; Ms. Beverly Jacobs on behalf of the co-chairs; His excellency Jose Miguel Insulza, Secratary General of the Organization of America States; and Her Excellency, Patricia Langan-Torell, Ambassador of Canada to the Republic of Panama.

After the introductions, an overview of the previous summits and the 3rd summit work plan was presented by Hector Huertas (Kuna) and Grand Chief Ed John.

The purpose of the 3rd Indigenous Summit is to provide an international forum for discussion of indigenous leaders on a range of policy issues related to the work of the Organization of American States and the themes to be addressed during the 5th Summit of the Americas.

The theme of the 3rd Indigenous Leaders Summit is “Implementing the Rights of the Indigenous Peoples of the Americas for Present and Future Generations”.
UCTPTN 04.14.2009
Posted by UCTP TAINO NEWS at 1:37 PM

I attended this working conference in Panama City and wish to report that everyone worked hard to finalize the document to be submitted today in Trinidad for review before the Americas World Summit.
This historic Declaration document must be supported to ensure the preservation of our sacred ancestral heritage and cultural rights. Your assistance is requested.