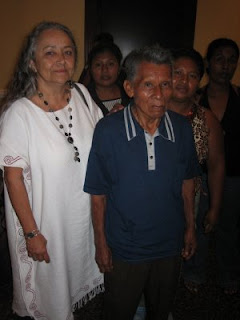 Naniki Reyes Ocasio (Boriken Taino) meets with Naso Nation Grand Chief Valentin Santana and other community members at the 3rd Indigenous Leaders Conference in Panama City.
Panama City, Panama (UCTP Taino News) – During the final session of the 3rd Indigenous Leaders Summit of the Americas on April 15, delegates were unpleasantly surprised to learn about the relocation of the indigenous Naso Nation in Panama. The Naso are currently living without adequate shelter as a result of a police action following their protest of the construction of the Bonyik hydroelectric dam, which is threatening their ancestral homelands.

Traveling from the night before, several dozen weary Naso including elders, women, and children made an impromptu appearance at the summit where indigenous leaders from across the hemisphere were gathered. The Naso requested time to present their case as the summit delegates were finalizing a declaration and plan of action to be lobbied the next day at the 5th Summit of the Americas in Trinidad. Presentations were made by Naso youth and Naso traditional leader Valentin Santana.

According to reports as recently as 30 March 2009; over 100 heavily-armed Panamanian policemen entered Naso territory and destroyed 30 homes. As a result of this action nearly 200 Naso including 65 children were forcibly evicted from their own community on the San San River in the Bocas del Torro area. Eight children were hospitalized for exposure to tear gas. The Naso Tribal Nation is comprised of approximately 3,500 persons living in 11 tribal villages.

Although new reports claim that the police have now been withdrawn, the eviction order against the Naso has not yet been lifted. According to a recent communiqué from Cultural Survival, the original order was issued by local official Aracelys Sanchez. She has now been replaced by Jorge Gamarra who has promised to lift the order. Cultural Survival (a U.S. based NGO) has been supporting the Naso with an international campaign to bring awareness to this issue. 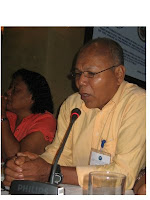 Kalinago Carib Chief Charles Williams of Dominica was enraged to hear of the injustices the Naso have been enduring over five centuries after the arrival of Columbus to the New World. Chief Williams reminded those gathered that "This is why we are here, to raise our voices in solidarity with all our suffering indigenous brothers and sisters".

Borrero concluded his remarks with a proposal that the situation of the Naso be included in the final documents of the session. His proposals were unanimously accepted by those gathered in the plenary.

Chairing the emotional session was Hector Huertas, a representative of the indigenous Kuna Council of Panama. Huertas assured those gathered that he would follow-up on the situation and inform the wider community as to any developments in this case.
Damon Corrie and Roger Hernandez contributed to this article. (Photos: R. Hernandez)