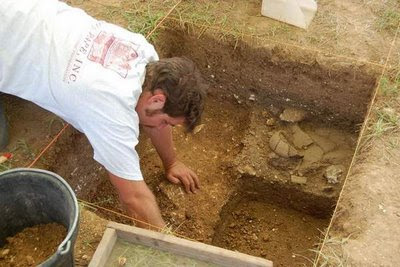 (Photo provided by the University of Alabama) Former UA grad student Paul Noe carefully digs within an excavation square at the site of a former native village in eastern Cuba.

A joint University of Alabama and Cuban archaeological dig in eastern Cuba is revealing how the natives there lived when Christopher Columbus found them and, more importantly, how Indians reacted to the Spanish.

“We have very few cases in the Caribbean where we can point to a certain place and say, ‘This is exactly what happened when Europeans hit the scene,’ ” said UA professor Jim Knight. “Of course, we have the Spanish documents, but archaeology can tell a different story sometimes. Some of these documents tend to whitewash what happened, but artifacts won’t lie.”

It took Knight nearly seven years to get permission and forms signed for UA to led an expedition in Cuba.

For the past two summers, UA graduate students worked alongside professional archaeologists with the Central-Eastern Department of archaeology of the science ministry of Cuba to dig through El Chorro de Maita, a large Indian settlement on a hillside off island’s eastern shore. The effort was sponsored by the National Geographic Society.

“It’s extremely rare for a U.S. institution to partner with a Cuban institution. It’s been our hope we could work something out from our end, and it worked out,” he said.

Cubans have long worked with European archaeologists and researchers, and the site UA wanted to work is widely known in Cuba. There is a museum there, and Knight compared it to Moundville here in Alabama.

Knight is well-versed in Native American culture in the Southeast and studying their encounters with Spanish conquistadors is a natural transition for the UA professor. The dig in Cuba recovered several thousand Spanish artifacts, far more than on any site Knight had ever seen, he said.

But archaeologists also found small stone idols, evidence the society had a hierarchical structure. The Arawakan Indians were similar to those at Moundville, the Mississippian Indians, in structure and sophistication when Columbus landed in Cuba in 1492. Although it’s likely that the explorer landed near El Chorro de Maita, it’s impossible to tell, Knight said.

The site was an Indian town from the late 1300s to the early 1500s, when Spain conquered Cuba and essentially wiped out Arawakan society. It is that interim time period from Columbus’ landing to Spanish society’s dominance that Knight and other researchers in the project are interested in understanding.

For instance, among the Spanish artifacts at the site were fancy tableware, which could mean Spanish settlers lived in the old Indian huts for a time or that Indians picked up the habits of their conquerors.

To understand more of the two cultures’ interaction, John Worth, a professor of anthropology at the University of West Florida, joined the team to decipher Spanish government documents from the day. Written in a Spanish barely recognizable as such by today’s standards, Worth is hoping to align the documents with the timeline established by the dig in order to understand how the Arawakans eventually melded into Spanish culture.

“We’ll eventually narrow down and pin down who we’re talking about, what the nature of the Indian contact was there because we really don’t know yet what kind of operation there was in that particularly district,” Knight said.
Author: Adam Jones
Source: Tuscaloosa News.com

*UCTP Taino News Editor’s note: This article is posted for information purposes and does not necessarily reflect the views of the UCTP Taino News Service or the United Confederation of Taino People.
Posted by UCTP TAINO NEWS at 12:06 PM