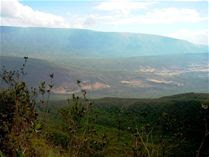 PEDENALES, Dominican Republic. - Thousands of hectares of the Sierra de Bahoruco National Park (southwest), in the area known as Los Brocosis, are being ravaged by farmers, with the Environment Ministry’s indifference, reports newspaper El Dia.

The farmers are lumbering virgin forests untouched even by the Taino Indians, said the biologist Nicolas Corona, who affirmed that more than protected area, the Bahoruco is becoming farmland. “Unfortunately the park is disappearing day by day, minute by minute. Right now they are cutting down thousands of tareas every year, and everything stays the same.”

Interviewed by newspaper El Dia, the scientist said farmers from the communities Pedernales, Las Mercedes, Aguas Negras and El Mogote participate in the activity, which he affirmed has already destroyed Bahoruco almost entire southwestern section, including Los Arroyos, Aguas Negras “and as rains erode the vegetal cover, those places no longer produce much, and so they destroy other places.”

After calling the practice a crime, Corona said 22 wildfires have occurred in the mountain range so far this year from farmers making clearings, especially in the higher part of Las Mercedes. “The farmers who are in Los Brocosis already depredated Los Arroyos, Las Mercedes, Aguas Negras, La Compañia, La Altagracia and Las Abejas.”
Source: Dominican Today
Posted by UCTP TAINO NEWS at 12:18 AM