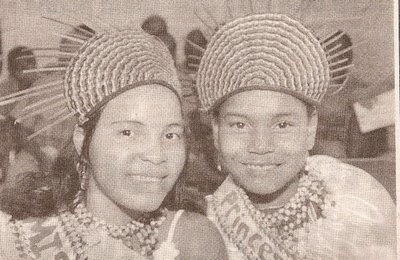 Carib Territory, Dominica (UCTP Taino News) – 10 contestants competed for the Miss Kalinago and Princess Natari pageant crowns as part of “Carib Week” in September 2008. This year the annual pageant was held at the in Bataca, Dominica and two of the contestants, Miss Juslyn Antoine and Miss Darylia Sanford, took home the coveted titles.

Leader of the Karina Cultural Group and coordinator of the pageant Miranda Langlais stated that contestants must be “dedicated” and “take pride” in the showcasing of their talent and culture.

Langlais, who is recognized by her people as a Kalingo Cultural Queen, also noted that “the very first Carib Queen pageant was organized by former Carib Chief Hillary Fredrick in 1996.”

A second pageant was held in 1998 and it has since become an annual event.

Carib Week is observed in commemoration of the Kalinago uprising that took place in on September 19, 1930.

Congratulations to Ms Miranda Langlais, and the Kalinago Cultural Group, on the sucessful staging of this year's Miss Kalinago and Princess Natari Pageant.
Congratulations also to the winners Ms Juslyn Antoine, and Ms Darylia Sandford. You have made the Kalinago people proud.