New York, NY (UCTP Taino News) – Although most "mainstream Americans" may have never heard of the Peace and Dignity Journeys this monumental, grass roots community effort has occurred every four years since 1992 to manifest the indigenous prophecy of the Eagle and Condor. This prophecy states that we are living in a time when Indigenous Peoples of the Western Hemisphere shall reunite spiritually in order to help heal their Nations and work towards a better future for the present and coming generations. Starting with runners on opposite ends of the continent from Eklutna, Alaska to Tierra del Fuego, Chile, the participants will make an incredible journey over seven months traveling through hundreds of indigenous communities.
While visiting various communities these indigenous ambassadors will be carrying sacred staffs representing the spiritual solidarity of various Nations and take part in local ceremonies and dialogs as well as receive community prayers. 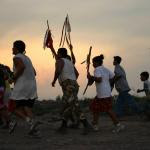 Currently, runners that began in Alaska, May 1st are now in Canada and have formed two groups. One group of runners will travel west down to California and the other will make their way through the central part of the U.S. through the Great Plains.

Simultaneously, there is a route retracing the Cherokee Trail of Tears and for the first time in the Run's history an East Coast Tributary route has been organized to begin in New York City on Saturday, June 14th 2008. Organizers are in the process of outreaching to Native Nations on the East Coast in the spirit of bringing unity for this sacred prayer. Among the runners confirmed to leave from the East Coast route will be a Taino community member, Maximus Matos.

Maximus, whose family originates from the island of Boriken (Puerto Rico) has never run a marathon so one may ask just why would he get involved?

"First and foremost I run for my People, the Taino Nation" stated Maximus. "I run to unite us as one and yet there is so much more as this historic run will also unite Indigenous Nations, Reservations, Sacred Sites and Communities stretching from the North to South America."

In recognition of his effort and vision the United Confederation of Taino People (UCTP) has pledged to provide Maximus with a sacred unity staff gifted to the Taino from the Lokono Arawak Nation as well as some supplies for his journey.

"This is an historic moment for the Taino People" stated Roberto Borrero, a UCTP representative. "Maximus is taking on a very important role as a Taino ambassador and as community we understand that he is not just representing himself but he is representing our present and future generations on and off the islands"

Maximus, like other runners, will also need financial contributions to help support him on this incredible journey. Runners will need food, personal supplies, and clothing for various weather conditions in addition to camping equipment and other items. Supporters accompanying the runners in vans also need assistance with gas money etc. as the Peace and Dignity Journeys receive no corporate money and all fundraising is done through grants and grass roots community fundraising. Some money has been raised by the New York committee but according to run organizer Jeannie Luna it is not enough to sustain their journey.

While there have been some pledges to receive the runners and provide overnight housing and food Luna also states that a "majority of the route still needs places that will host runners, give [them] a place to sleep, shower, wash clothes, and have a meal."

Open to all "colors and cultures", the Peace and Dignity Journey is scheduled to conclude when the runners reach the center of the hemisphere in Panama on November 13th, 2008. In Panama City runners and supporters will be greeted by the Kuna Nation.

For more information on the Peace and Dignity Journeys visit their website at http://www.peaceanddignityjourneys.com. To donate directly or get involved in the East Coast Run contact Jeannie Luna at lalunaxicana@yahoo.com or 646.245.1216. For donations to sponsor the Taino runner please contact the UCTP at uctp_ny@yahoo.com or 1(212)604-4186.
The theme of this years Peace and Dignity Journey is "Honoring Our Sacred Sites".